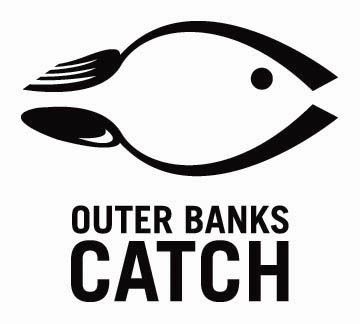 The logo for Outer Banks Catch, the local seafood marketing campaign, was selected Monday, May 10, at a joint meeting of the program’s executive committee and the Dare County Commission for Working Watermen.

The logo features a silhouette of a fish composed from the lines of a fork and spoon, and was one of six presented Monday by Corder Philips, a Charlotte-based marketing firm.

John Corder, president of the company, said the tone of the logo was intended to be casual, comfortable, and friendly, qualities identified in a branding workshop held in Manteo last month.

Other designs presented by the firm included a school of fish, a fisherman carrying a large fish, and a row of fishermen.

But most participants at the Monday meeting agreed with Lee Nettles, director of the Outer Banks Visitors Bureau, who noted that incorporating eating utensils into the design underscored the connection to food and dining, appealing to seafood consumers.

Reaching consensus on a tagline for the program proved a little more difficult for the group.  In a preliminary exercise, “It’s Gotta Be Local” won out as the most popular slogan, but several participants voiced concern that the connection to commercial fishing was not evident.

After a lengthy discussion, the group decided on “Local Fishermen Approved” as the tagline.

“This will have to be done on a village-by-village basis.  It’d be unrealistic to expect restaurant owners in Buxton to come to a meeting in Manteo during tourist season,” he said.

Sparrow said meetings at various locations in Dare, Currituck, Hyde, and Tyrrell counties, the area served by the Outer Banks Catch program, would be scheduled for early June.

Participants at the Monday evening meeting discussed various point-of-sale promotional items, such as certificates, plaques, buttons, and placemats, but agreed more input from restaurants and retail markets would help identify the most cost-efficient promotional tools.

Corder said that deciding on an easily identifiable icon that provides immediate identification of local seafood was just the first step in developing consumer awareness.

“The most compelling point is that local seafood is better, and the identity will need to be back-filled with educating a new audience every week during the peak tourist season in a way that will become memorable,” he said.

Outer Banks Catch is a marketing initiative developed to create a brand identity for fish and shellfish landed by commercial fishermen in Dare, Currituck, Hyde, and Tyrrell counties.  Regional seafood branding campaigns also are underway in Carteret and Brunswick counties and on Ocracoke Island.

Consumer research shows an increasing demand for local seafood, and a willingness to pay more for local products over imported seafood.

The next Outer Banks Catch executive committee meeting will be on June 14.