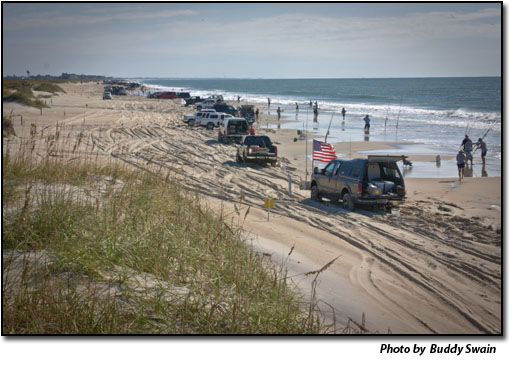 The Sandfiddlers of Buxton took first place for the third straight year in the Hatteras Village Surf Fishing Tournament.

The team’s captain is Eddie Ochs and its members this year were Rick Scarborough, Tim Wilson, Buddy Jennette, and Andy Stephenson.  The team caught 55 fish for a total of 108 points.

First place among the all-women’s teams went to the Queen Mackerals of Nags Head.  The team captain is Peggy Byrd and the team members this year were Susie Vonsuskil, Betty Wright, Linda Harper, Barbara Daniel, and Ashley Bahen.  The team caught 22 fish for a total of 62 points.

The weather was ideal for the two days of fishing – Friday, Sept. 10, and Saturday, Sept. 11 – which isn’t always the case for this tournament which coincides with the peak of the hurricane season.

“The weather was maybe too good,” said tournament director Fred Kirkland, who added that there wasn’t enough wind to keep the water moving and the fish biting.

Overall, he said, fewer fish were caught this year but that all the teams had a good time on the beach waiting for the next hookup.

The awards were handed out Saturday night at a ceremony at the Hatteras Village Civic Center.

In addition to the Sandfiddlers and the Queen Mackerals, the winners were:

Second place overall went to the Hammer’d Brothers of Midlothian, Va., with 62 fish for 108 points.

Third place overall was won by the Surfside Anglers of Elizabeth City, N.C.

Second place in the women’s division went to the Salty Bankers of Buxton with 22 fish for 57 points.

Third place in the women’s division was won by the Showstoppers of Nags Head with 24 fish for 43 points.

The award for the largest bluefish caught by a male went to Butch Eason with a 191/4-inch fish, and Linda Harper won for the women with an 18-inch fish.

The largest fish, other than a bluefish, caught by a male went to Gary Richardson for a 27-inch red drum and for a female was won by Cheryl Boyd with an 18-inch Spanish mackerel.

The largest trash fish award was won by Gary VanOverberger with a 66-inch stingray.

All of the proceeds from this catch-and-release tournament benefit the programs and charities supported by the Hatteras Village Civic Association.