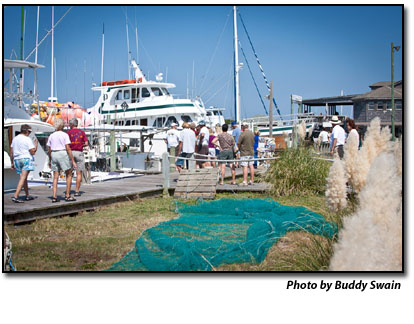 The sixth annual Day at the Docks on Saturday, Sept. 18, saw wonderful weather – blue skies and a northeast breeze – and the best turnout ever, according to organizer Lynne Foster.

“We were really pleased with the turnout,” said Foster.  “And the weather couldn’t have been better. I think there were more people watching each event.”

There were all kinds of events happening all day at many locations along the Hatteras village waterfront. The celebration brings visitors and island families together to celebrate the living traditions and heritage of Hatteras Island.

The day began at 10 a.m. with a release of white doves owned and trained by Lou Browning and Liz Browning Fox of Hatteras Doves. Releasing the doves were Clara and Alice Oden, the daughters of Dan and April Oden.

During the rest of the day, there was food, music, cooking demonstrations, a chowder cook-off, a kids’ fishing contest, and various other competitions.

Second place was claimed by the Inn on Pamlico Sound with a corn and crab chowder with a creamy base.  And the Breakwater Restaurant won third place for its creamy fish chowder, made with tile fish.

The chowder cook-off raised $2,200, which is shared by the cancer foundation and the Day at the Docks organization.

This year, 108 youngsters competed in the Children’s Fishing Contest – the largest number since the contest started at the first Day at the Docks.

You’ll find the winners at the end of this article.

Winners in other contests were:

Survivor Suit Race:  Jerry Rosell won first place in the 17 years and up category, and  Zach Hackley  placed second. In the 16 and under category, Cameron Whitaker placed first and Patrick O’Neal came in second.

The day ended, as always, with the Blessing of the Fleet at 6 p.m.

Twenty-five boats joined the parade this year, which was led by the Albatross I, the oldest working charter boat in the fleet.

The Rev. Corey Oliver led the ceremony, which honors watermen who have died during the year and includes prayers for the safety of the fleet in the coming year. Islanders Johnnie Baum and Dale Farrow also read poems.

After the blessing, Michael Peele and  family and friends carried a wreath on his traditonal Hatteras shad boat through the breakwater nad tossed it into the waters of the Pamlico Sound as the sun set and, with the evening clouds, cast a remarkable light over the waters.

The day ended with a Lawn Dance at the Community Center, where the partygoers celebrated the engagement of Hatteras native Jennifer Burrus and newcomer Zach Hackley.

Jennifer, whose family owns the Burrus Red & White Supermarket, and Zach, who is from Charlotte, met at the University of North Carolina at Chapel Hill and have been dating for two years.  Jennifer graduated in 2009 and Zach graduated last spring.

Zach says he intended to pop the question at the top of the Cape Hatteras Lighthouse during the next full moon tour, which is Sept. 23, but he got impatient and proposed at his apartment before the dance.

She said “yes,” but no date has been set for the wedding.