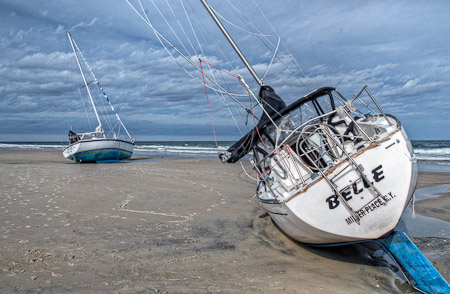 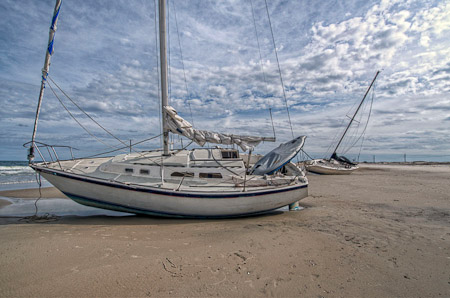 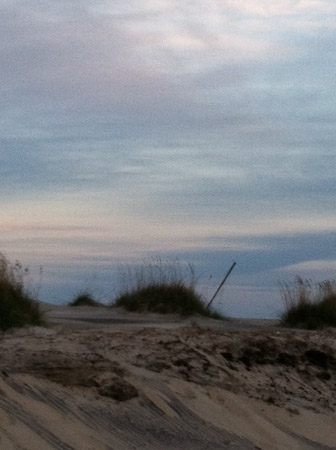 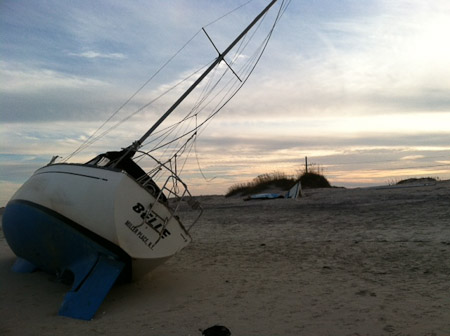 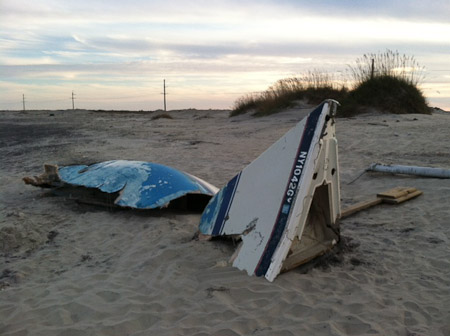 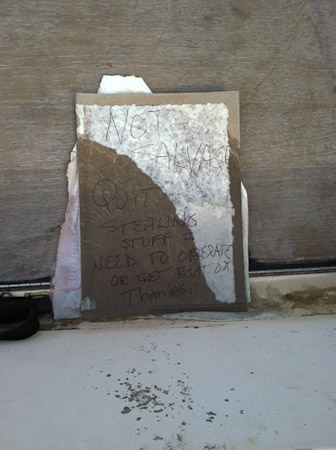 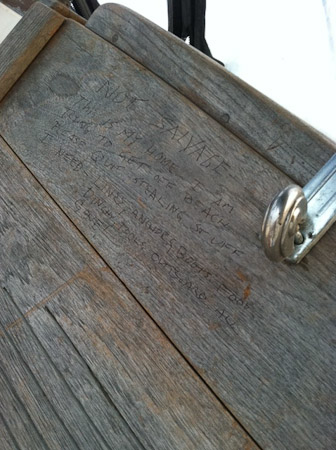 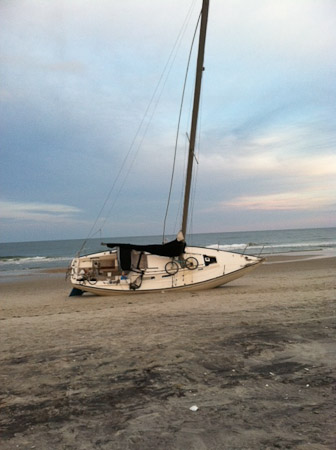 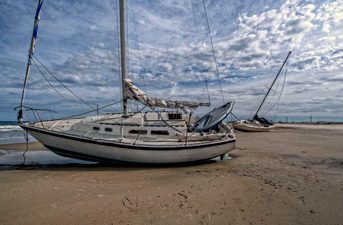 With its mast visible over the dunes, a damaged sailboat stranded for weeks on a Pea Island beach is attracting numerous curious passers-by and concerned local residents who want to help.

The Belle, a 30-foot vessel from Miller Place, N.Y., and another sailboat that was towing it ran aground about Oct. 20. The Belle is now sitting on the dry sand, listing dramatically to the west.

Only a few pieces remain of the other vessel, which was cut up and hauled away.

“There’s always someone here,” Theresa Lauder, a Salvo property owner from Portsmouth, Va. said, standing near the sad-looking Belle before sunset on Saturday. “So it seems like it’s a tourist stop.”

While Lauder was talking, at least a dozen other people trekked across the dunes to look at the boat.

Sara Zimmerman, a Duck resident, said that she and her husband noticed the mast as they were driving south down Highway 12.

But Zimmerman quickly added that she did feel bad for the sailor and was glad that no one was injured.

The vessel appeared to be unoccupied, and the sailor had left two notes on it pleading with people.

“NOT SALVAGE,” he wrote with a pen on the cabin’s exterior wall. “This is my home. I am trying to get off beach. Please quit stealing stuff I need. Lines, anchors, boots, food, dinghy, tools, outboard: all gone!”

A similar note was scribbled on a piece of cardboard taped to the deck.

The deck was in disarray, with little more than strewn ropes, an orange life jacket and an opened case of bottled water of any obvious value. A bicycle, however, remained attached to the boat’s mast under the sail.

Lauder’s husband, James, said that the couple have visited the site just south of the Bonner Bridge several times over the last two weeks, and talked with the sailor and another man who have been struggling to save the boats.
“I asked him if he needed anything, and he said we’re pretty well stocked up with food and water,” James Lauder said. But he did say he needed an acetylene torch, which Lauder did not have.

The second sailboat, the Playmate out of Cornwall, N.Y., was severely damaged and had been intentionally broken into pieces and hauled away on Friday, said Jay Eddy, U.S. Fish and Wildlife Service law enforcement officer.

Eddy said that refuge officials have been working with the sailor to give him the time he needs to get his boats off the beach, which is within Pea Island National Wildlife Refuge, but the agency is not able to provide the equipment or assist in the removal.

The saga has unfolded on the Facebook page for Rodanthe Watersports and Campground, starting with a photograph and a comment posted on Oct. 20, followed by continuous updates and dozens of comments, suggestions, offers to help, and some mild criticism of the sailor’s judgment.

“People have been bringing him food, clothes, water, and other supplies,” Rodanthe Watersports and Campground posted on Oct. 29. “I know of a several guys that have put on their wetsuits and are helping him to repair the boats.

“Yesterday, while I was there for a few minutes in the morning someone came and said they would be coming back with fiberglass supplies and a few other things he could use,” the post continued.  “He also told me that a group of guys came and helped out a couple of days ago. And, unfortunately, someone came and took an anchor while he was sleeping.”

The owners of the campground declined to be interviewed, but did not object to quoting their Facebook page, which identified the sailor as Eric Brockmyre.

Theresa Lauder described the sailor as a tall, thin, fit-looking man who appeared to be in his mid-50s.

“He was very friendly,” she said.

Reportedly, the sailor had purchased the vessels after they were damaged in Hurricane Sandy. He had been sailing about seven miles offshore, heading to South Carolina to repair the vessels when he fell asleep. The wind apparently had shifted as he was sleeping and he was awoken suddenly when both boats bumped bottom.

According to the Facebook page, the sailor, who had initially slept on his boat, has been staying on and off with Good Samaritans while he figures out how to get his remaining boat off the beach.