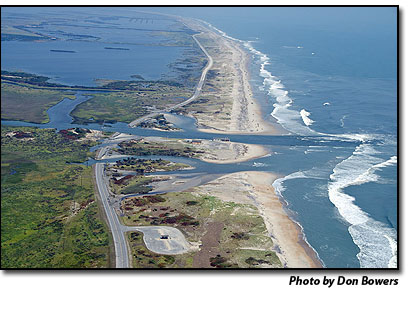 Beach nourishment has been essentially taken off the table as a permanent fix at two temporary repairs on the northern end of Highway 12 on Hatteras Island. But a dramatically different alternative that materialized out of the blue is now being considered.

At a Dec. 15 meeting of a team of state and federal agency representatives, the North Carolina Department of Transportation decided to narrow the number of viable alternatives for long-term solutions for the N.C. 12 breaches on Pea Island and in Rodanthe that were torn open by Hurricane Irene in August.

The group, called the merger team, agreed that widening the shoreline at the weakened areas was impractical.

“It’s not seen as the more attractive of the alternatives, no,” Victor Barbour, NCDOT technical services administrator said in an interview.

Nourishment was included in two of four options for each location that were presented at public meetings in Manteo and Rodanthe earlier this month. Another meeting is scheduled to be held Jan. 5 on Ocracoke Island. Public comment will be accepted through Jan. 20.

Although the estimated price tag was not available, Barbour said that beach nourishment at either of the areas, which have high erosion rates, would cost “millions and millions of dollars” and involve a “continual battle with Mother Nature.”

Sand replenishment would also be complicated by the difficulty in finding compatible offshore sand sources, he said. And the U.S. Fish and Wildlife Service and the National Park Service, the agencies that manage the beaches in Pea Island and Rodanthe, respectively, have policies against beach nourishment.

“There are laws and regulations associated with some of the options that we are not likely to be able to meet,” said NCDOT Chief Operating Officer Jim Trogdon in a prepared statement. “By focusing our efforts on the most realistic options, we can more efficiently develop long-term fixes for N.C. 12 that will provide a reliable way for people to get to jobs and education.”

In Rodanthe, where the highway was breached at Mirlo Beach on the north end, the remaining options for a long-term fix include building a bridge within the easement and building a bridge that would extend into the Pamlico Sound.

At the Pea Island breach, the general consensus reached by the merger team was to build a new road or bridge west of where Highway 12 is currently located, or to allow NCDOT to build a permanent bridge where the road now stands. Currently, the Pea Island Inlet is spanned by a temporary bridge.

Another potential — and newly proposed –option, suggested by Fish and Wildlife officials, would be construction of a bridge that starts north of the Pea Island breach, curves out into Pamlico Sound and ties in at Rodanthe.

The idea is still at the conceptual stage.

“We have not even drawn a line on paper yet,” said Greer Beaty, a DOT spokeswoman.

Engineers with DOT and the Wildlife Service are working to gather data and details to see if such an option would be even be realistic, cost- and/or design-wise, Barbour said. No such conclusion was made, he said, when it was agreed to explore the concept.

“It was one of the ideas that the merger team felt warranted looking into,” he said. “It is just a different possibility.”

The Fish and Wildlife Service had supported construction of a 17.5-mile bridge in Pamlico Sound that would have bypassed the refuge, which was an earlier design in the Herbert C. Bonner Bridge replacement project. But DOT discarded the option because of cost constraints. Construction of a new bridge just west of the existing bridge is scheduled to begin in 2013.

After public comments are reviewed and engineering is complete, the merger team is expected to meet by the end of January to select the alternatives. A recommendation will then be made to the governor.

“Our fervent desire and hope,” Barbour said, “is that it will be wrapped up within 45 days.”

For more information about NCDOT’s efforts to fix the breaches, visit www.ncdot.org/travel/nc12recovery, follow the Highway 12 Twitter feed at http://twitter.com/NCDOT_NC12  or go to the Repairing N.C. 12 blog at http://nc12repairs.blogspot.com/.

NCDOT is also accepting comments on the long-term plan for Highway 12 via traditional mail and e-mail. The comment form and contact information is available online at www.ncdot.gov/travel/nc12recovery.