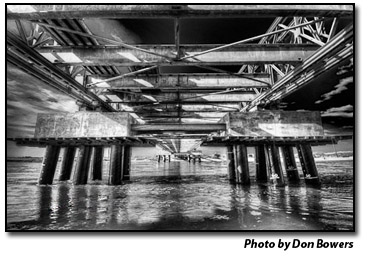 As I went through my files from 2011, it was apparent that Hurricane Irene, which made landfall just south of Hatteras and Ocracoke on Aug. 27, was by far the biggest event of the year. It was also the top Google search for 2011. So, of course, the bulk of my slide show covers the weeks I spent documenting the disaster.

Starting in January, the winter of 2011 was one of the snowiest on record for the East Coast. Because we take our vacation in the winter, I usually miss the opportunity to capture the rare days that snow accumulates here. This year I got lucky and caught a very picturesque event. Snow fell for much of the day on Saturday, Jan. 22, with blizzard-like conditions in the afternoon. Driving around during the storm, I was reminded of Utah.

We got up at 5 a.m. the next morning to capture the white landscape before it got too tracked up. It paid off with the shot of the lighthouse with the moon setting behind it.

High school basketball rules during the winter, and once again the Lady Canes dominated.

Winter provides the best light conditions of the year for shooting landscapes and beach scenes if you don’t want crowds. A couple of trips out to Cape Point got me the shots of the deer, the shorebirds, the cormorants on the pond, the skeleton, and the piping plover.

The plover was only a few yards from my truck when I snapped the picture. It was foraging and totally comfortable around me. It makes me angry that this small bird gets more protection than the President while compromising beach access all around it. Beach access will once again be a huge topic in 2012 and hopefully common sense will prevail.

I did a couple of photo shoots this year and got some favorites to share.

The first was Johnny Conner’s classic Willys Jeep on the beach. When you see a fundraiser here, chances are the Conner clan had a hand in it. Thanks, Johnny.

The other shoot was Maggie Austin and her horse, Dan. Maggie is a senior at Cape Hatteras Secondary School this year.

Surfing can be good here year-round, and no one hits the water more than my good friend Scott Busbey. Scott has been surfing for nearly 50 years and is shown surfing at the lighthouse.

This spring also saw the dismantling of the scaffolding around the Bodie Island Lighthouse before repairs and renovations were completed because of federal budget constraints.

A lightning strike was responsible for the Pains Bay wildfire on the Dare County mainland, which burned for the better part of two months. Northern beaches really suffered from the smoke and haze, but it also created spectacular sunsets, as shown in the paddleboarding shots from the first annual Paddle Palooza contest in Frisco.

And speaking of fire, a big “thank you” goes out to our local fire departments for allowing me to shoot their controlled burns. The skill, training, and professionalism of these volunteers are impressive.

June brings back graduation for our seniors. Brianna James looks happy to be moving on.

Assignments were few this summer, but I always enjoy covering island history. I anxiously watched for hours as folks tried to locate two Confederate cannons near the site of Fort Clark at Hatteras Inlet.  But it did not happen. I feel it’s only a matter of time before Mel Covey, Joe Schwarzer, and Danny Couch get their prize.

I thought we dodged several bullets in recent years, considering the active storm seasons, and felt we got lucky again with Irene until we drove north to Avon and especially the tri-villages of Rodanthe, Waves, and Salvo. I knew then that life on the island would change for years, much like it did after Hurricane Isabel in 2003.

My wife, Anne, and I realized it was important to get the stories and pictures out quickly and accurately. What followed was weeks of heartache documenting the losses of our fellow islanders. But these are tough people, and we also witnessed again and again how islanders come together to help their neighbors.

Although a lot of work still needs to be done, the progress has been unprecedented. Gov. Beverly Perdue paid a visit to talk to people affected and evaluate damage. Local and state government officials moved quickly to get a temporary bridge and road open to salvage the rest of the tourist season. Cape Hatteras Electric Cooperative deserves a lot of credit as well.

Fall fundraisers and events — such as the Hatteras Island Fun Run, Bike the Light, and the annual Blessing of the Fleet — were rescheduled but came back strong.

Closing out the year was the annual Christmas Parade in Hatteras village on a day with beautiful weather and good spirits.

Last, but not least, I would like to thank Dwight and Debbie Burrus of Burrus Flying Service for taking me up to photograph our island paradise from the air.