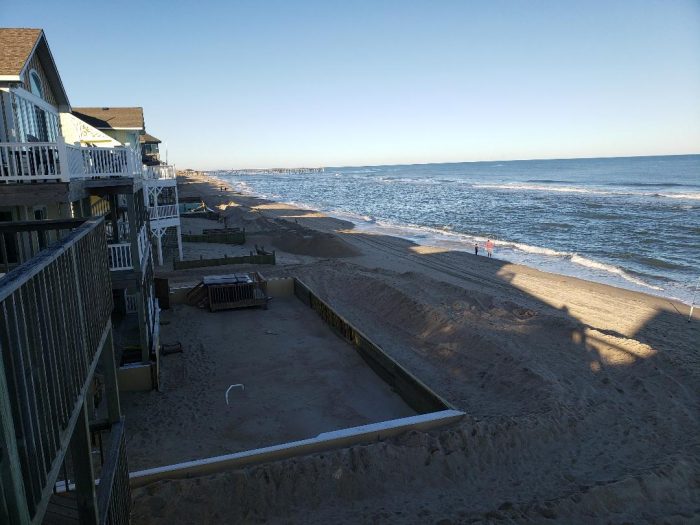 A potential beach nourishment project in Avon took a step forward at the February 4 meeting of the Dare County Board of Commissioners (BOC), as the Board unanimously selected contractor Coastal Science and Engineering to submit a contract for a feasibility study.

County Manager Bobby Outten explained to the Board that the Capital Improvements Planning Committee (CIP) had received three responses from potential companies who were willing to orchestrate the study, all of whom had conducted similar projects in the Outer Banks region before.

“We’re lucky that we had three excellent contenders, and we had three groups that can certainly do the work. We would certainly be satisfied with any of them,” said Outten.

The CIP chose Coastal Science and Engineering to conduct the study, as they had previous experience on Hatteras Island, and had performed the Buxton Beach Nourishment project in 2017 and 2018.

“That group has some familiarity with our beaches down there,” said Outten. “It was convenient for them, convenient for us, and it just made sense. They have also worked with the Park Service and have that familiarity, and they’ve also met with the public in the past with [the Buxton] project, as well as with people from Avon.”

As such, the Capital Improvement Planning Committee made the ensuing recommendation to the BOC to select Coastal Science and Engineering (CSE) for the upcoming study. “If you select them today, I will call [them] after the meeting, and they will forward us that contract,” said Outten. “Hopefully, we will be have that contract before our next meeting for you to approve… the study can then start once we’ve approved that contract at the [next] meeting.”

The motion to approve CSE was made by Hatteras Island Commissioner Danny Couch, and was unanimously passed by the Board.

At a BOC meeting on November 4, the Commission first agreed to allocate up to $250,000 from the Beach Nourishment Fund to pay for an upcoming study to examine the details and costs of initiating a beach nourishment project in Avon. The allocation for an Avon study corresponded with a similar request for study-related funds from the Town of Southern Shores, which is also considering a beach nourishment project in the near future.

The study would target the general Ocean View Drive area of Avon, which is an approximate 2-mile stretch of shoreline that has been subjected to regular ocean overwash during recent nor’easters and storms.  When these storms occur, overwash pours onto Ocean View Drive and then inundates N.C. Highway 12 with saltwater, which is just a couple of lots away from the neighboring beaches.

During the most recent nor’easter that occurred in mid-November, N.C. Highway 12 was repeatedly flooded during multiple high tide cycles over the course of three days.

Advocates hope that beach nourishment – or the process of pumping sand onto an eroding shoreline to widen the existing beach – could be a possible solution to this regular erosion and flooding. The beach nourishment project that was recently completed in Buxton in February of 2018 deposited 2.6 million cubic yards of sand on a 2.9-mile stretch of Buxton shoreline, and a maintenance project at the site is scheduled for 2021 / 2022.

The county provides funding for beach nourishment projects through the Beach Nourishment Fund. A portion of the 6% Dare County Occupancy Tax, (which derives from visitor accommodations), is set aside for the fund annually, and in addition, funds for beach nourishment are also provided by property and municipal service district taxes.