The university now estimates 2020 will have an additional 10 hurricanes, 15 named storms and five major (Category 3-4-5) hurricanes.

The Atlantic has already had nine named storms and two hurricanes through Aug. 4., including this week’s Isaias making landfall in North Carolina. 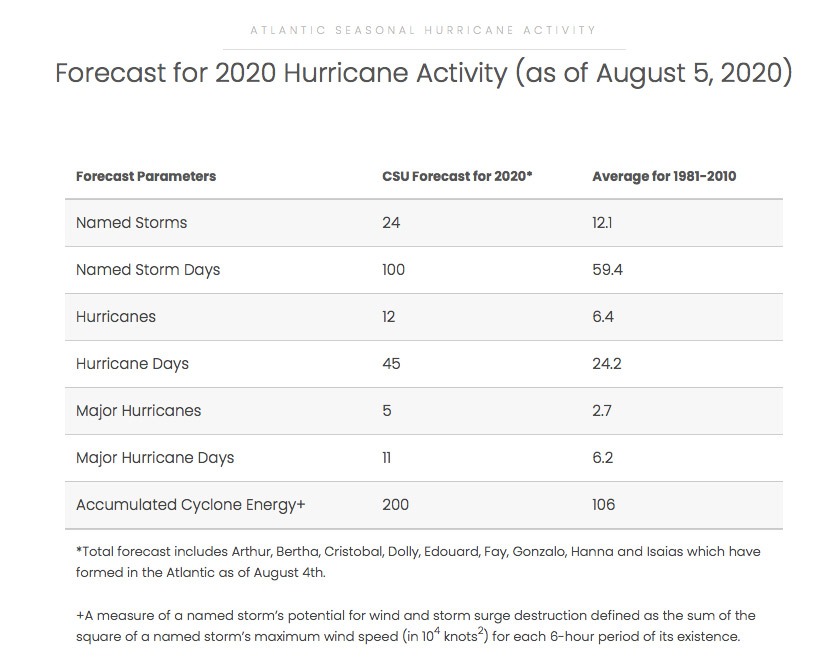 The probability of U.S. major hurricane landfall is estimated to be about 140 percent of the long-period full-season average, researchers said.

The new forecast is based on an extended-range early August statistical prediction scheme that was developed using 38 years of past data. Analog predictors are also utilized.

Lower vertical wind shear allows hurricanes to better vertically couple and also inhibits entrainment of dry air into the circulation. Sea surface temperatures averaged across the eastern and central tropical Pacific are slightly cooler than average, and it appears likely that there will be either cool neutral ENSO or weak La Niña conditions during the peak of the Atlantic hurricane season.

“All of these conditions in combination point to a high likelihood of an extremely active hurricane season in 2020,” CSU wrote.

“Coastal residents are reminded that it only takes one hurricane making landfall to make it an active season for them, and they need to prepare the same for every season, regardless of how much activity is predicted,” the research team wrote.