The Dare County Board of Commissioners (BOC) unanimously approved a motion at their December 6 meeting to award a $25,870,000 bid to Great Lakes Dredge & Dock Company for the 2022 Avon and Buxton beach nourishment projects.

Great Lakes Dredge & Dock Company (GLDD) submitted the lowest bid, which was 13.7% less than project estimates from both FEMA and Coastal Science & Engineering (CSE), the county’s consultant for the two upcoming projects.

The estimate is effectively $3.6 million less than CSE and FEMA’s joint estimate, (and the amount in Dare County’s beach nourishment model), although the cost savings will be distributed among all the stakeholders contributing to the project, which includes Dare County and FEMA.

“FEMA is sharing in the project, so we got to reduce their shares well,” said David Clawson, Dare County Finance Director, at the Dec. 6 BOC meeting. “So when you reduce the FEMA share for the bid, we’re $2.9 million dollars to the good from what we planned on.”

Per a memo from Coastal Science and Engineering (CSE), GLDD is America’s largest dredging contractor and a major international competitor. CSE has worked with GLDD on 10 beach nourishment projects since 1990, which includes 2011 and 2019 projects in Nags Head, and a number of similar projects in South Carolina and North Carolina.

“With extensive experience, two available hopper dredges, and a bid [that is approximately] 11% lower than the second-lowest bid, GLDD is clearly the Apparent Low Bidder,” stated CSE in the memo.

The memo also included price comparisons of recent beach nourishment projects in similar areas, with the Avon and Buxton’s cost being noticeably less than their coastal counterparts.

“When you look at [the cost] compared to what’s going on in Myrtle Beach and other areas, and the challenges that we have out here, that is very competitive. That’s a significant figure,” said Hatteras Island Commissioner Danny Couch. 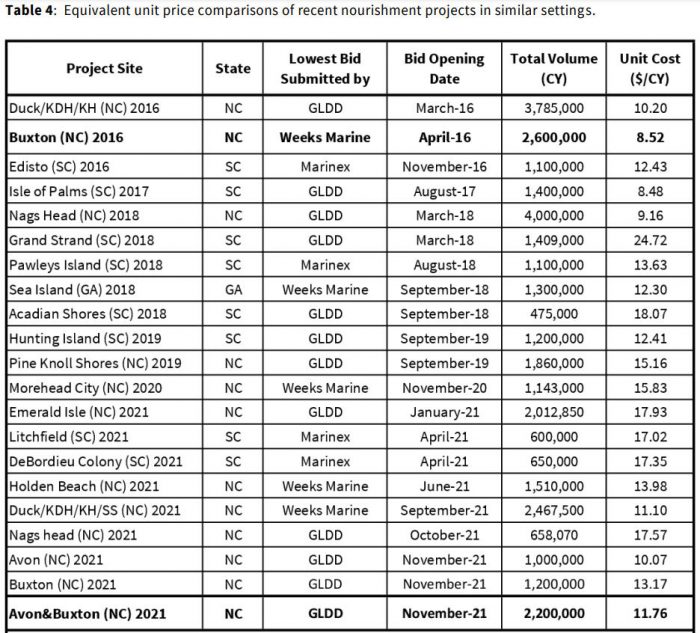 After a brief presentation of the figures by Clawson, Couch introduced a motion to award the bid to Great Lakes for the 2022 project, and to authorize the county manager to proceed with a contract for the county’s debt related to the project, subject to the Local Government Commission’s approval on February 1, 2022. The motion was unanimously approved.

Now that the county has awarded the work, CSE will coordinate with the contractor, NPS, state and federal resource agencies, and the county to determine an “Order of Work” before construction.

The project is slated to take place from May 1 through September 30, 2022, in order to perform the work during optimal weather conditions.

The Avon Beach Nourishment project is a new endeavor that will deposit 1 million cubic yards of sand on approximately 2.2 miles of Avon shoreline, from Due East Road to the southern village borer. Earlier in 2021, the BOC voted to create a new service tax district in Avon to help fund the project.

Once the project begins, it is expected to take about 90 days to be completed, but the timeframe is very dependent on the weather. For example, the Buxton project was delayed by a few months due to a number of storms that impacted the area in 2017.

For more information on the upcoming projects, see our beach nourishment FAQs.