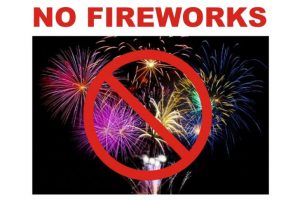 In many parts of Dare County, all forms of fireworks are banned, and in the remaining communities, any fireworks that propel off the ground are illegal. But several recent incidents indicate they are being ignited on the beach, with potentially harmful results.

Abby Madson of Virginia was walking on the beach in Southern Shores with her sister on the evening of Aug. 3, when she heard a loud noise. “We turned around and were shocked to see (a large family group) launching fireworks,” she wrote in an email to the Voice.

Madson said some fireworks were launched into the dunes and toward a sea turtle hatching area, resulting in some dune grass catching fire. “We were a bit shocked and weren’t sure what to do,” she added. “As the mother took the kids away, in our direction, the rest of the group eventually put the fire out with sand.”

About 50 miles to the south in Rodanthe, Trisha Brock was staying at the Cape Hatteras KOA when someone began setting off fireworks on the beach around 11:30 p.m., according to a post she shared on the Rodanthe Pier Fan Page. “Our puppy, Harper got scared and ran off,” she wrote, asking for help finding the dog. The post generated an outpouring of support and Harper was found the next day.

In both Southern Shores and Hatteras Island, all fireworks are banned, according to the Dare County Fire Marshal’s Office. That means that even sparklers, sparkling foundations, snakes and glow worms are prohibited. Fireworks are also prohibited on the Cape Hatteras National Seashore, said Michael Barber, public information officer for the National Park Service Outer Banks Group.

The towns of Duck and Nags Head have also banned all types of fireworks. In Duck and in Dare County’s unincorporated jurisdiction of Hatteras Island, the misdemeanor charge for using them carries a $250 fine. It is also illegal to detonate or possess fireworks in the Cape Hatteras National Seashore, Barber notes.

The remaining areas of unincorporated Dare County and the towns of Manteo, Kill Devil Hills and Kitty Hawk adhere to North Carolina law, which prohibits any fireworks that propel an object or that explode. These would include firecrackers, sky rocket and Roman candles.“Over the last few years, homeowners adjacent to seashore beaches have voiced concerns about the use of fireworks by beach visitors, especially around the July Fourth holiday,” Barber acknowledged, adding that law enforcement staff do respond to reports of fireworks. He encouraged visitors to CHNS to call 252-473-3444 to report an incident.

Duck Police Chief John Cueto said his department did respond to a call Aug. 4 on Plover Drive involving noise and fireworks, however no fireworks were confiscated.

Citing a past incident in which fireworks caught the cedar shingles of a house on fire, Chief Cueto asserted that the Town of Duck doesn’t tolerate the use of fireworks. “Fire departments see all sorts of situations like that,” he noted. “We stand by the fact that they are illegal. From sparklers to launchables, all fireworks are illegal in Duck.”

The chief said signage and messaging has helped to decrease the amount of calls the department has gotten in recent years, noting that between June 1 and Aug. 4, there were a total of seven calls for fireworks. “Last year we confiscated materials and issued citations…But the number is definitely down.”

And despite the incident on the beach in Southern Shores, Lieutenant Jon Slegel said his department hasn’t received many calls this year relating to fireworks. “We get some, but not that many,” he said.