As a charter vessel approaches the South Ferry Channel, what appears to be the shadowy head of a cobra rising from an undulating body waits on the west side of the channel entrance, as if ready to strike.

Countless other visual imaginings are no doubt possible from the stunning birds-eye view of Hatteras Inlet provided by drone footage launched off the Tradition, owned by Hatteras charter Capt. Cameron Whitaker. What is most striking, in addition to the degree of visible shoaling, is how short the South Ferry Channel looks in the vast inlet, at least relative to the angst it has caused.

Once again, trouble with shoaling in the channel was of much concern to members of the Dare County Waterways Commission during its virtual meeting on Monday. Their fears ended up being well-founded.

Whitaker said the videos were taken in mid-May by the company Point Click Fish, which provided the footage for the Hatteras Village Offshore Open tournament. Tournament organizer Laura Young said that as far as she was aware, the drone footage, which had been shared earlier with commission Chair Steve “Creature” Coulter, was the first aerial video of the inlet taken with a drone.

During the relatively short meeting, commissioners were updated on the Army Corps of Engineers’ dredge Merritt, but the news was not what they wanted to hear. The dredge had worked for four days last week to clear the channel that had been clogged again after being dredged in April and May. Still, the prognosis for the coming months was not good.

Young, with the tournament, said local charter fishers have started jokingly referring to the channel as the “ditch of death.”

“It’s very shallow, it’s very narrow,” Coulter reported to commissioners about recent conditions. “We had one boat run aground out there this morning.”

Ken Willson, the county’s consultant with Wilmington-based Coastal Protection Engineering, suggested that after the post-dredging survey is done at the South Ferry Channel, surveyors should check out another nearby passage. “If they could take a look at the south channel again, and get some additional data on seeing whether or not that south channel is going to open again … l think that’s really the solution to this problem.”

Others suggested that the north channel may be a possible alternative. Both south and north passages were natural channels that had been used in the past, and both are currently shoaled in sections and not navigable.

Responding later to Commissioner Dan Oden’s question about what could be done if the South Ferry Channel shoals again in July, Willson encouraged members to start looking at other options. In the last four years, he said, he had never seen a channel that has been so much trouble. Considering how inefficient it has been to dredge it repeatedly, he said, “I think trying to maintain this current route is going to continue to be kind of futile.”

In a later interview, Willson said that in the past, the dredge could work to clear South Ferry Channel for 25 days or so and it would hold for months. That’s not the case now.

In the most recent project, Willson added, even with two dredges, the Merritt and the Murden, working in the channel, they were only able to be make a narrow cut through the shoal. Ultimately, he said, the sand from the side-caster Merritt ended up piling up on the side of the channel. Soon, the dredged material started filling up the channel.

“The problem we’re having there needs immediate attention. But unfortunately, we can’t get the traction to get attention immediately,” said member Danny Couch in a later interview.

“We don’t have the time to wait. We’ve got to figure out how to keep it together.” 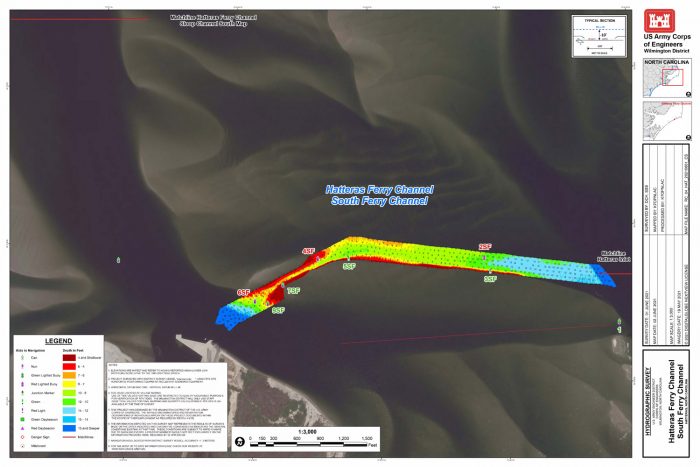 Couch, who is the Hatteras Island representative on the Dare County Board of Commissioners, said that the hope is that the channel can be maintained until the Corps completes its realignment of Hatteras Inlet channels, which is expected in the fall or early winter. If the Corps authorizes realigning the inlet, maintenance will be able to be more flexible and expansive and more responsive to conditions. The county has requested that the Corps add Hatteras Inlet bar to the realignment of Rollinson Channel project, which is the federally authorized ferry channel that is regularly maintained by the Corps.

In a resolution approved by the Dare County Board of Commissioners in May, the county says that the current authorization goes back to the 1940s and is no longer relevant to the conditions in Hatteras Inlet or how it’s used.

In the interim, Couch said, it is critical to the local economy that the inlet is accessible for boaters during fishing tournaments.

“It’s almost like the tournaments need to get a pilot like we used to have in the old days,” Couch said, referring to guides who could help navigate boats safely through the bar into the inlet.

Hatteras fishing tournaments are important to the Hatteras village economy, he said, and shoaling issues can scare away out-of-town vessels.

“That tide floats all boats,” Couch said of the revenue from tournaments. “From the coffee shop to the tackle shops, it impacts every phase of the economy.”

And fishing vessels that are well made enough to fish large game fish in the ocean are not cheap.

“Eleven million will get you a Cadillac,” Couch says. “If you damage your running gear with these big boats, you don’t just run to Ace Hardware for parts.”

On the contrary, he said, a damaged propellor can cost upwards of $60,000, not including labor.

Coulter said in an email that the hope is that the county will budget more funds to dredge in July, if it’s necessary and the agencies grant an exemption. Meanwhile, he wrote, the North Carolina Department of Transportation’s Ferry Division is taking bids to dredge part of the emergency ferry route, if needed.

The chairman also encouraged members to send letters of support for the realignment to the county for it to forward to the Corps.

“These letters will go a long way in helping re-establish our safe and viable way to the ocean,” he wrote.