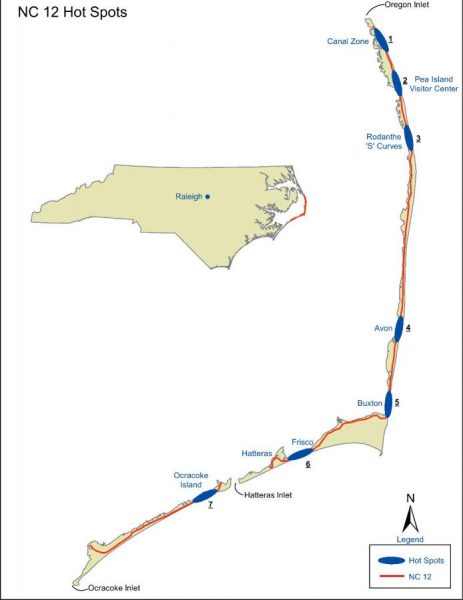 With the first meeting of the NC12 Task Force held on May 19, the initial steps toward developing a long-range plan to address concerns about the often-perilous state of NC12 south of Oregon Inlet were taken.

“The board, the Park Service and the community and NCDOT…understand that we have problems with NC 12, and most of our problems occur, south of Oregon [Inlet] and…on Ocracoke Island,” said Dare County Manager and Task Force Member Bobby Outten in an interview with the Voice. “The road closes when we have storms [and] there are hot spots that everybody knows about…that are the next place where we’re going to have issues when the wind and the storms come from a certain direction.”

For his part, Woodard stressed that the task force will focus on planning and how areas of concern about NC 12 on Hatteras and Ocracoke Islands can be addressed over an extended period of time.

“One of the things I want to accomplish with this task force is a long-term plan,” Woodard said. And while he added that the goal of the task force is to create a plan that would be a catalyst for action, the task force itself is not going to get involved in those projects.

The opening meeting of the task force focused on creating a subcommittee, chaired by Outten, to examine how to move forward.

The makeup of the subcommittee will include representatives from the Southern Environmental Law Center, NC Division of Coastal Management (CAMA), the NC Wildlife Resources Commission, the US Corps of Engineers and a number of other state and federal agencies. Within the task force committee, Sterling Baker, NCDOT, Division 1 Engineer, will address highway and ferry issues.

The subcommittee represents a diverse range of groups and organizations, organizations that are often seen as at odds with one another over the best way to address transportation concerns on the Outer Banks, something Outten acknowledges.

“We’ve got to deal with the issues that people look at this differently than we might,” he said. “You may as well have the conversation in the beginning and understand what your issues are so that you can address them, and then hopefully you can come to consensus and resolve the problem.”

With the first subcommittee meeting scheduled on June 16, Outten outlined a short lifespan for the NC 12 Task Force.

“I believe what has to come back in the next [task force] meeting is getting their comments, hearing their concerns, hearing their issues,” he said. “Then the third meeting, set the priorities. I don’t see this going on for a year. Three meetings or four meetings should be enough to accomplish our goal,” he said.