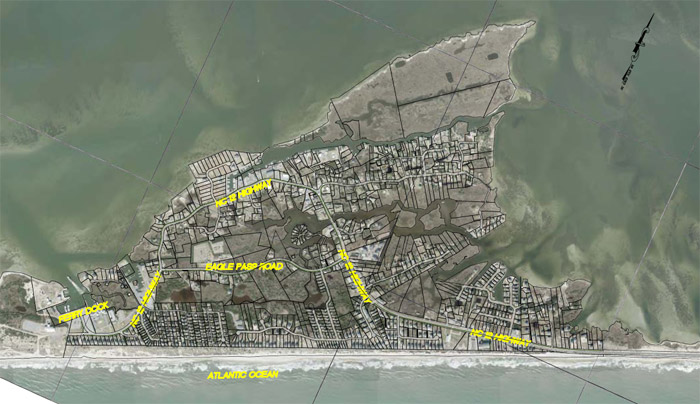 The planned multi-use pathway for Hatteras Village is on the verge of taking a big step forward as three survey teams will start to plot out the route beginning in early May.

“It’s a big, big step, and will be the first phase of the project,” said Chairperson for the Hatteras Village Community Center District, Ricki Shepherd. “We feel like this will be really good for the village, so we are taking the bull by the horns.”

The 3.75-mile pathway will stretch throughout the village, from the Hatteras / Ocracoke ferry docks to the northern town borders. It will also include a loop along Eagle Pass Road, which will make the area safer and more accessible. “We need [the pathway] down Eagle Pass Road badly because there’s no shoulder there, and we have our lovely park located back there too,” said Shepherd.

The surveying is being performed by Albemarle & Associates, Ltd., which tackled surveys for other pathways on Hatteras Island, such as in Avon and the tri-villages. During the process, the teams will map out the exact layout of the pathway, which primarily follows one side of the highway, and which will include boardwalks over wetlands. “The pathway is going to be entirely a NCDOT right-of-way, so obviously we have to be very sure we know exactly where it’s going,” said Shepherd.

With three teams tackling the project, the surveying is expected to be completed by mid-June so as not to cause a nuisance to summertime traffic. From there, it’s a matter of creating a bid package and – more importantly – securing funding for the ensuing work.

This phase of the pathway project will cost approximately $200,000, but there are already potential funding sources that are being examined. Shepherd reports that having the surveys complete will put the village in an even better position to obtain funds, especially since there is more time to thoroughly fill out and review grant applications.

Shepherd states that the village’s best chance for funding is likely through the USDOT Better Utilizing Investments to Leverage Development, or BUILD Transportation Discretionary Grant program, which provides funding for projects that have a significant local or regional impact.

“The deadline for the BUILD grant is July, and last year, we found out about it at the last minute and sent in an application on the deadline date,” said Shepherd. “This year, with the completion of the surveys, we have skin in the game, and I think our chances are very good to get the money to actually build the pathway.”

“We’re looking at other things too, but that’s our best shot,” she added. “When you’re a rural community like we are, it’s a very good possibility.”

Other options for funding include a no interest loan from the Cape Hatteras Electric Cooperative, which is also concurrently being explored. “That’s a great program – it’s a zero interest loan, and once you pay it back, that money stays within the community, so that’s a great service that we have on the island,” said Shepherd.

As funding possibilities are examined, and the survey work begins in earnest, the Hatteras Village pathway is getting closer than ever to coming to fruition.

“If things work out perfectly, the BUILD grants are announced in December, and if we do get the grant, then we could be starting construction next spring – it’s within the realm of possibility,” said Shepherd.

Combined with the new Hatteras / Ocracoke passenger ferry, the multi-use pathway has a lot of potential to bring more visitors to the southern end of Hatteras Island.

“All of these [aspects] mesh together so beautifully, and that’s part of our narrative when we are applying for grants,” said Shepherd. “The surveying is a huge step in the process, and I feel like we are on the right track.”