A public comment period is currently open on how to address future dredging operations in Hatteras Inlet, which is a solid step in a years-long process to make the inlet more navigable for the state-run ferry, as well as everyday charter and commercial fishing vessels.

The public comment period runs from October 18 to November 18, 2021, and corresponds with a Draft Environmental Assessment (EA) from the US Army Corps of Engineers (USACE) on the potential realignment of the Hatteras Ferry Channel in Hatteras Inlet.

Maintenance of Hatteras Inlet’s navigation channels has been a constant goal of the Dare County Waterways Commission and local stakeholders, for both economic and safety reasons. Much of mariners’ frustration in recent years has been directed at the fragmented regulatory status of the inlet’s passages – some federal, some state, some neither, some both. Realignment of the federal channel would help address these gaps.

“The long and the short of it is that the Army Corps of Engineers has not dredged past Barney Slough for almost 10 years now,” said Steve “Creature” Coulter, Chairman of the Dare County Waterways Commission. “Since the end of the island started washing way, they quit trying to [dredge there], the Coast Guard pulled the buoys going to the gorge, and that’s when we formed the horseshoe route… and we’ve been having trouble with that route for the past 4 to 5 years.”

The Corps is proposing to add language that will expand the area included in the existing federal authorization for Rollinson Channel, a long-sought revision that, until recently, was believed to be possible only through an act of Congress.

“Basically, it will be expanding the area we can dredge, in the aspect that it would make the entire horseshoe route federal,” said Coulter. “It’s no man’s land right now. As far as where the horseshoe turn begins, that’s where federal authorization stops.”

Another benefit of the realignment would be that federal funds would be available for future dredging projects, as the entire channel would be under federal authority and would no longer be a “no man’s land” with no entity – federal or state government – taking responsibility for dredging events.

The 132-page EA outlines three possible alternatives for moving forward, which is the meat and potatoes of the public comment period.

The first alternative – No Action – is essentially dead in the water, as the USACE states in the EA that it is not a viable option, and that it’s more or less included for comparative purposes.

The other two options, (which both include the channel realignment and future maintenance of the current horseshoe route), differ mainly in the date range for dredging.

Regular users of the inlet, including the Dare Country Waterways Commission, are urging the public to opt for Alternative 3.

“What it boils down to is we want option 3,” said Coulter. “The big benefits of Alternative 3 would be year-round dredging, the use of federal tax dollars to help maintain it, and there may also be a new offshore dump site [established] on the east side of Hatteras Inlet.”

Coulter notes that five of the dredging events over the past two years have been outside the current October-to-March window, and that the delays involved in asking for permission to dredge are inherently costly.

“Every time we have to ask permission, and have to wait for them to decide, it just keeps getting worse,” he said. “If you start shoveling when there’s only six inches of snow, it’s a lot easier to shovel later [in the winter] when six more inches fall. But if you have to shovel it all at once, it’s a pain in the butt, and in your wallet.”

Essentially, Alternative 3 would sidestep the lengthy process to obtain special permits to dredge in the summer, when the channel is arguably at its most treacherous (and popular), and would allow the USACE to dredge whenever there is an immediate need.

“There is a portion of [visitors] that do not come here anymore because of how bad that channel is, and that’s a big part of our community,” said Coulter. “And it affects us all – charter boats, transient boaters, the ferry, and the U.S. Coast Guard.”

While Alternative 3 is the preferred option for folks who are closely involved with navigating the inlet, as well as the USACE, an outline of all three alternatives is below:

The No Action alternative refers to the USACE’s ongoing but essentially impossible pursuit of maintaining the historical route, (parallel to the islands), which had been maintained by USACE since the 1960s, until the horseshoe route was formed out of necessity.

“The historical route is not currently navigable and re-establishing it would require a dual effort of sidecast dredging and commercial pipeline dredging almost continuously since it is a high shoaling area,” states the EA.

“Constant dredging over a ten-year period is expected to cost over $60 million with the sidecast dredge alone. For USACE to continue pursuing methods to maintain the historical channel would be expensive and dangerous.”

“The USCG, NCDOT ferries and local mariners have been using the horseshoe route for the past 8 years… If the USACE does not obtain clearances to maintain the horseshoe route, excessive strain would be placed on the State and local municipalities to independently maintain the channel… Although, the No Action alternative is not a viable option, it is carried forward for comparison purposes in the detailed analysis of Affected Environments and Potential Impacts in Section 5.”

Alternative 2 – Maintenance of the horseshoe route between October 1 and March 31, with agency approval required for dredging between April 1 and September 30.

“Based on input from resource agencies during project scoping, a dredging window of 1 October – 31 March has been recommended to protect sensitive stages of marine life that use the estuarine habitat for spawning and development. This window is also consistent with the windows included in the Dare County (and soon-to-be NCDOT) dredging permits with use of government plant dredges,” states the EA.

Under this alternative, USACE would be required to conduct regular maintenance with government plant dredges between October 1 and March 31, but would have the option to request relief from the window when severe shoaling occurs outside of these months. Coordination with the resource agencies would be required prior to every dredging event outside of the off-season window, no matter how minimal the dredging.

Implementing a dredging window would not decrease the overall amount of dredging needed to maintain the channel, and it would not lessen the amount of dredging that would be needed outside of the window, per the EA. As seen with recent dredging events in South Ferry Channel, numerous requests for emergency dredging in the summer months have been necessary to keep the channel navigable year-round. Since 2017, 50% of shoaling that resulted in the need for dredging occurred outside of the October to March timeframe.

Alternative 3 (Proposed Action) – Maintenance of the horseshoe route any time of year.

“The proposed action is dredging of the realigned horseshoe route in a proactive manner by monitoring shoals through routine survey efforts and planning for scheduled maintenance events,” states the EA.

“Government-owned dredges are scheduled to perform channel maintenance up and down the east coast. Heavy southwest winds in July are common, resulting in shifting sands and narrowing channels. Delays in travel and delivery, as well as assistance and rescue, would occur regularly during the summer months if coordination is required prior to dredging. Therefore, the proposed action of maintenance any time of year… is in the best interest of the project.”

Only the high shoaling areas, hot spots, within the project area will be dredged. The anticipated hot spots encompass a very small percentage of the corridor area, only 33 of the total 1,580 acres, or 2% of the total area. “The intent is to remove these isolated shoals before emergency conditions occur, thereby, lessening the severity of potential navigational hazards and eliminating the need for numerous, short notice, emergency dredging events,” states the EA. “The use of the special purpose and sidecast dredges allows for prompt and economical responses to quickly address developing shoaling situations.”

In between the contract dredging events, the USACE would utilize a government plant as needed to maintain hot spots any time of year.

“The current practice of declaring emergencies after shoals become a problem and then coordinating with agencies has proven to be burdensome, time consuming and inefficient. The issue is especially burdensome over a weekend or during a holiday. Due to environmental concerns expressed during the NEPA scoping process for this EA, the USACE plans to implement certain conditions to allow small quantities of regular maintenance dredging to occur any time of year without coordination.”

The public can submit comments on their preferred option, (or on any aspect of the draft EA), via an email to Emily.B.Hughes@usace.army.mil.

Comments will be accepted until November 18, 2021. USACE will then compile and respond to all comments, which will help shape the Final EA and probable Finding of No Significant Impact (FONSI).

“Based on the information in the EA, we expect the proposed federal action will not significantly affect the quality of the human environment; therefore, an Environmental Impact Statement will not be required,” stated Jenny Owens, Chief of Environmental Resources Section for USACE in an email. “If this opinion is upheld following circulation of this EA, a Finding of No Significant Impact will be signed and circulated.”

Once finalized, the FONSI will be signed by the USACE Colonel and distributed to partner agencies, which is estimated to occur in late 2021 / early 2022.

In the meantime, Coulter and other mariners who regularly struggle with navigating the inlet hope that the endeavor, (and particularly Alternative 3), will receive as much public support as possible.

“It’s a numbers game, that’s all it is. Sometimes it doesn’t matter what’s right or wrong – as far as the government goes, they look at numbers, and they look at what’s popular,” said Coulter. “And hopefully, in the future, we can work together to keep all of it open – county, state, and federal. We all do better when we work together.” 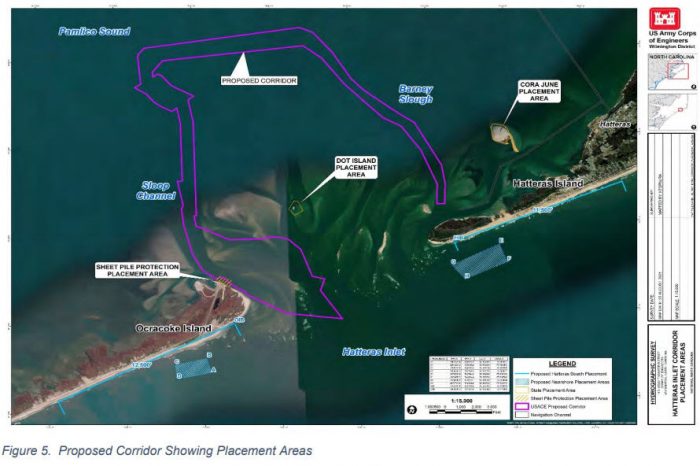