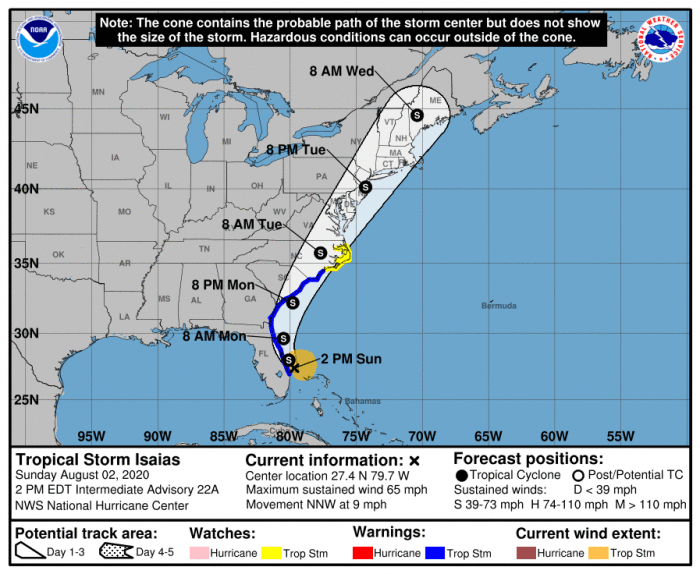 The following update was released by Dare County on Sunday afternoon, August 2.

As of 11 a.m. on Sunday morning, a Tropical Storm Watch became effective for Dare County, indicating that tropical storm conditions are possible through Tuesday. The local State of Emergency declaration remains in effect along with a mandatory evacuation for Hatteras Island, including the villages of Rodanthe, Waves, Salvo, Avon, Buxton, Frisco and Hatteras Village.

While many are disappointed that their vacation plans to Hatteras Island have been disrupted by Tropical Storm Isaias, it is important to understand that evacuation decisions are made in the interest of public health and safety.

The National Weather Service is forecasting up to 3 feet of storm surge inundation which can cause significant ocean overwash along Highway 12 on Hatteras Island, the only means of egress for the island. As roads become covered with sand and water, it becomes difficult, sometimes impossible, for law enforcement, fire and emergency medical service personnel to respond to calls for assistance in a timely manner. In recent years, storms with forecasts similar to Isaias have caused road closures and the loss of personal property. Safety of residents and visitors is our top priority.

While there are no evacuation orders in effect for the northern beaches (Hurricane Evacuation Zone B), including the towns of Duck, Southern Shores, Kitty Hawk, Kill Devil Hills, Nags Head and Manteo, it is important for residents and visitors to closely watch updated forecasts and be prepared for impacts starting late Monday and into Tuesday. Expect soundside flooding in low lying areas impacted by southerly winds. In addition, there will be an increased threat for tornadoes.

Ocean conditions are extremely dangerous and will remain so over the next few days.  Everyone should stay out of the water, even experienced swimmers. For updated beach forecasts, visit weather.gov/beach/.

Dare County offices north of Oregon Inlet will operate on their normal schedule on Monday; however, County offices on Hatteras Island will be closed.

Commercial trash collection for all areas of Hatteras Island remain on schedule for Monday, August 3.