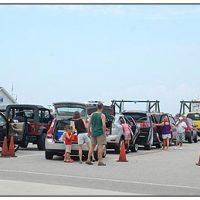 The North Carolina Department of Transportation’s Ferry Division is now accepting applications for 2017 vendor priority loading passes on the Hatteras Inlet route. Under legislation passed by the General Assembly in 2016, applicants must pay a $150 fee for the pass and be verified as a provider of regular commercial services to Ocracoke Island. The […]

Beginning Monday, Dec. 5, the storm debris removal contractor in Dare County will begin the second and final pass for storms debris removal in all Hatteras Island villages and other areas of unincorporated Dare County. All storm generated debris must be placed on the public right-of-way by Monday, Dec. 5. Contractors will not pick-up storm […] 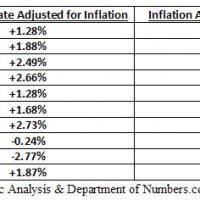 By TOM HRANICKA One bright spot in the statistical reports is that building permits have finally started to recover, increasing 75 percent over the level recorded through September 2015. I have been scratching my head trying to figure out what is underlying these bewildering patterns. A few years ago, I would have focused on delays […]

Thanksgiving is here much too soon for me. There has been a nip in the air this week, but how could it be Thanksgiving already when it seems that only yesterday it was hot and  humid and the islands were filled with tourists? The past three months have just flown by in my mind —  […]

March 5, 1937 – November 24, 2016 WAVES– Barbara Jean Robbins Snider, 79, died on Nov. 24, 2016. Born inDayton, Ohio, she was the daughter of the late Mark Wilson Robbins andZella Imo Beeman. Barbara was a homemaker and the widow of William Ray“Bill” Snider. Barbara is survived by a daughter, Kathryn A. Snider-Warren andhusband, […] 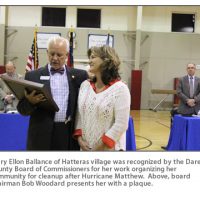 The Dare County Board of Commissioners had its semi-monthly meeting at the Fessenden Center in Buxton on Monday, Nov. 21, and Hurricane Matthew recovery efforts dominated the meeting once again. Roughly 25-30 members of the community attended the meeting, which included representatives from FEMA and the Small Business Administration, National Park Service Outer Banks Group […]

Danny Couch of Buxton, Hatteras Island’s commissioner-elect, was the guest on the Nov. 20 edition of “To the Point,” a Radio Hatteras interview show, hosted by Irene Nolan, editor of The Island Free Press. In a wide-ranging conversation, Couch, who will be sworn in as a member of the Dare Commissioners at the next regular […] 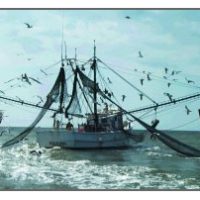 The petition was submitted Nov. 2 by the North Carolina Wildlife Federation, and the commission has 120 days from that date to grant or deny the request. Chairman Sammy Corbett outlined the petition review procedure at the commission’s business meeting last week. First, the petition must be deemed complete. Under state law, a person may […] 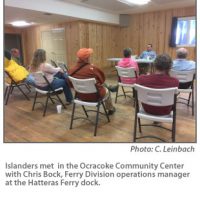 Although the N.C. Ferry Division has set up the spring ferry schedule, they haven’t released it yet and may include suggestions by Ocracoke islanders to add a run at 10:30 a.m. during the week. Chris Bock, manager of operations at Hatteras, attended the monthly meeting Monday, Nov. 14, in the Ocracoke Community Center and discussed […]