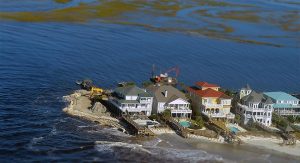 The population dynamics on the coast of North Carolina are changing, and the workload for coastal development permits is shifting, too.

To keep up with the times, the Division of Coastal Management will adjust the jurisdictions of its four regulatory district offices. The change will take place July 1.

Those seeking Coastal Area Management Act (CAMA) permits should note the altered districts, which will be adjusted as follows:

Those who have questions about coastal development permits can find contact information here.