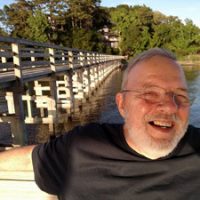 KITTY HAWK — Leslie D. Hunton passed away on May 30, 2019, after a long battle with renal cancer.

Les was born on January 30, 1949, in Jersey City to Leslie Hunton and Margaret (Durand) Hunton. He attended Jersey City public schools and graduated from Upsala College in East Orange, NJ. Les was a member of the New Jersey Army National Guard.

Les moved to Long Beach Island where he met his best friend, partner, caretaker, and wife Deborah Peraria. They were married in Ship Bottom, NJ.

Les worked in college textbook business as college store manager and sales rep for college textbooks with Follett College Book Co. in Chicago prior to moving to Vermont.

Deb and Les lived in Lanoka Harbor NJ where their son and only child James was born. They moved to the beautiful town of Huntington, VT and were active in the Community Church of Huntington. Les enjoyed playing bass guitar and was fortunate to play with three bands during his time in Vermont. They relocated to the Outer Banks in 2016 where they made many friends quickly and are active in All Saints Episcopal Church in Southern Shores.

Les is predeceased by his father, Leslie B. Hunton and brother in law, Carmen Ragusa.

Services will be held at All Saints Episcopal Church in Southern Shores sometime in the fall.