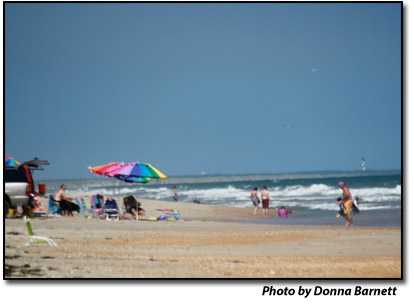 Supporters of a Senate bill to set aside the National Park Service’s final plan and special regulation on off-road vehicles at the Cape Hatteras National Seashore found a Democratic friend today at a Senate committee hearing.

Sen. Joe Manchin, D-W.Va., took up the cause, admonishing a Park Service witness and saying that the agency had become an “adversary” and “enemy” of the people who are suffering hardships because of the rule.

One more Democrat on their side, and the legislation might have a chance to be favorably voted out of the committee.

The Senate’s Energy and Natural Resources Committee had a hearing this afternoon on S 2372, a bipartisan bill introduced on April 26 by U.S. Sen. Richard Burr, R-N.C., and co-sponsored by U.S. Sen. Kay Hagan, D-N.C.

The title of the bill is the Preserving Public Access to Cape Hatteras Beaches Act. It would abolish the final ORV plan and rule and return the management of the seashore to the 2007 Interim Protected Species Management Plan until the Secretary of the Department of Interior and Director of the National Park Service devise a new ORV plan and final rule that meets the requirements set forth in the legislation.

A companion bill, with the same language, was passed by the U.S. House of Representatives last week as part of a package of 14 bills on parks and public lands.

That’s the most success any of the bills to return the seashore to the interim strategy has had in the House, and it passed on the third try. Jones has introduced a similar bill twice before.

A similar bill has also been introduced in the U.S. Senate, but the Energy and Natural Resources Committee voted it down in 2008 in a split along party lines – Democrats voting against sending the bill out of committee, which essentially killed it, and Republicans in favor.

So the Democratic senator from West Virginia’s impassioned support of the bill was a welcome surprise to the folks from Dare County who went to Washington to hear the testimony.

Other National Park Service related bills were part of today’s hearing and they ran the gamut from the Cape Hatteras access to legislation that would change the official name of Alaska’s Mt. McKinley to Mt. Denali.

Fewer witnesses were involved than in the house subcommittee hearing on the legislation.

The first panel included Herbert Frost, associate director of Natural Resource Stewardship and Science for the National Park Service and Ingrid Kolb, director of the Office of Management in the U.S. Department of Energy.

The second panel included the mayor of Oak Ridge, Tenn., who supported a bill to establish the Manhattan Project National Historical Park, and Warren Judge, chairman of the Dare County Board of Commissioners, and Derb Carter, director of the North Carolina office of the Southern Environmental Law Center, who both addressed S 2372.

Frost’s remarks were identical to those he made in the House subcommittee hearing, noting that the Park Service “strongly opposes” the bill.

Judge strongly defended the bill, addressing the issues he has in the past – denial of access, the rigidity of the plan that allows the superintendent no opportunity to manage according to conditions on the ground, the fact seashore was created as a “recreational” area, the size of the closures, and the economic damage to Hatteras Island.

Carter defended the final rule, noting its predecessor, the 2008 consent decree that settled a lawsuit, has meant that nesting success of birds and turtles has rebounded, and that tourism is booming in Dare County.

None of that testimony was surprising, but then came Joe Manchin.

He said many of his constituents have been coming to the seashore for generations and indicated that he had visited many times.

He first spoke directly to the Park Service’s witness.

“The majority of the people who live there are totally in favor of 2372,” he said, “and those who have filed lawsuits do not live there.”

The Park Service, he said, talks about increasing access for sportsmen, but he noted “that isn’t what this bill is all about.”

“Don’t you consider the people who live there and their livelihoods?” he asked.

“It’s unbelievable the hardship you are placing on those people,” Manchin continued, noting the Park Service had become an “adversary” and an “enemy.”

At the conclusion of the hearing, he asked Judge and Carter if they wanted to add anything.

Carter remarked that last week, 50 of the 65 miles of seashore beaches were “open.”

That allowed Judge to have the last word, again disputing much of what Carter had said.

Bobby Outten, Dare County manager and attorney, said afterward that Manchin “just got it,” referring to the restrictive nature of the final rule and the problems it has brought to the Hatteras and Ocracoke villages.

“I’m happy because we finally have people who are listening to us,” Judge said. “We’re happy that after all these years, someone is talking to us.”

He said the Dare County delegation had good meetings with members of the Burr and Hagan staffs.

The next step for the bill is for the Senate committee to move to mark-up and vote on it.

Assuming all of the committee Republicans support it, as they did in the House, it would need only two Democratic votes to be reported out favorably and perhaps go to the floor of the Senate.

An archived video of the hearing is available on the committee’s website at http://www.energy.senate.gov/public/index.cfm/2012/6/national-parks-subcommittee-hearing

The Senate Committee on Energy and Natural Resources website:
http://www.energy.senate.gov/public/index.cfm/hearings-and-business-meetings?ID=a64e4f88-18d3-4489-96a0-b1a89b2b51e6

The members of the Senate Energy and Natural Resources Committee:
http://www.energy.senate.gov/public/index.cfm/members

at the discretion of the editor.

The public is invited to help Cape Hatteras National Seashore (Seashore) staff clean up some of the collapsed house debris at six drop-in volunteer events that will be held this weekend. The event schedule starting on Friday, May 13, is as follows: Friday, May 13 from 9:30-11:30 a.m. and 2-4 p.m. Saturday, May 14 from [...] Seashore News |  Full Article

The public is invited to help Cape Hatteras National Seashore (Seashore) staff clean up some of the collapsed house debris at drop-in volunteer events from 9:30-11:30 a.m. and 2-4 p.m. on Thursday, May 12 and Friday, May 13. All four volunteer events are scheduled to begin at the Outer Banks KOA Resort, 25099 N.C. Highway [...] Seashore News |  Full Article

Avon Pier opens, and other National Seashore updates for the week ...

Seasonal educational programs at the Cape Hatteras National Seashore (CHNS) began on Sunday, April 24. These programs include special talks and presentations on unique aspects of the islands’ history, and all talks are free and open to the public. The early-season program schedule for the coming weeks is listed below, and upcoming events can also [...] Seashore News |  Full Article

The Cape Hatteras National Seashore recently announced that they are currently recruiting volunteer Lighthouse Keepers on Ocracoke Island for the 2022 summer season, Memorial Day through Labor Day. The position duties include helping to staff the lighthouse, and to provide basic upkeep of the Light Station site. This position is based out of the Ocracoke [...] Seashore News |  Full Article

An off-road (ORV) vehicle corridor has been established near Cape Point on Friday morning, April 15, due to American oystercatcher breeding activity, per a recent beach access update from the Cape Hatteras National Seashore (CHNS). “The same pair of [oystercatchers] that have used the Cape Point area for the last six years have laid a [...] Seashore News |  Full Article

A public comment period on an environmental assessment (EA) for the future rehabilitation and restoration of the Ocracoke Light Station ends on Wednesday, April 13. Two lightly-attended meetings were held in Ocracoke village on March 28 about the upcoming project, which seeks to repair and possibly raise historic buildings that are located at the Light [...] Seashore News |  Full Article

Seasonal ORV routes in front of villages close on April 15

Seasonal off-road vehicle (ORV) routes in front of Hatteras Island villages and the Ocracoke Campground become pedestrian-only starting this Friday, April 15. These routes, which run parallel to the towns of Hatteras, Frisco, Avon, and the Tri-villages, open to ORVs annually in the winter months when the visitor population is low, and close from April [...] Seashore News |  Full Article

Frisco and Cape Point campgrounds open, and other National Seashor ...

Reminder: Two meetings will be held on Monday, March 28, on Ocracoke Lighthouse Restoration

Beachgoers reminded not to leave holes on the shoreline

Clean up of collapsed house in Rodanthe to begin