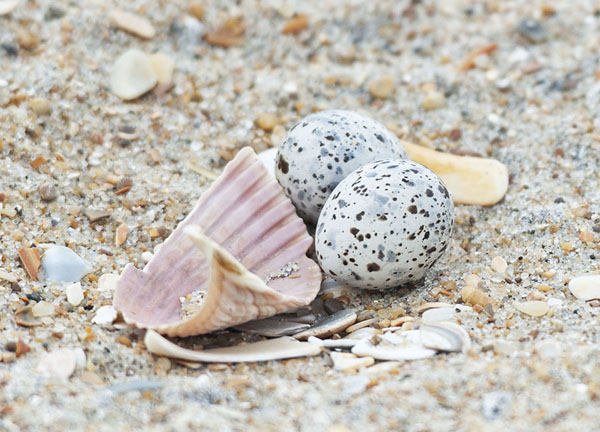 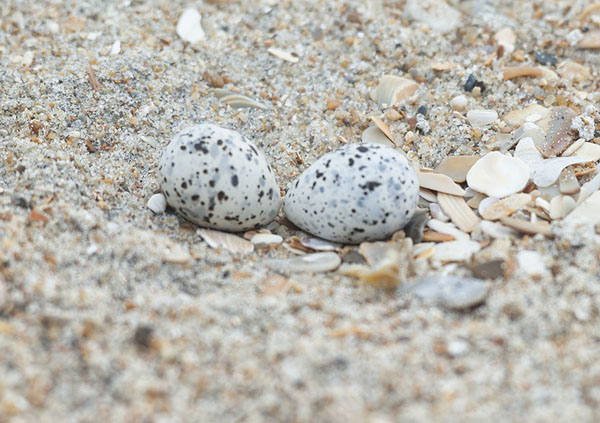 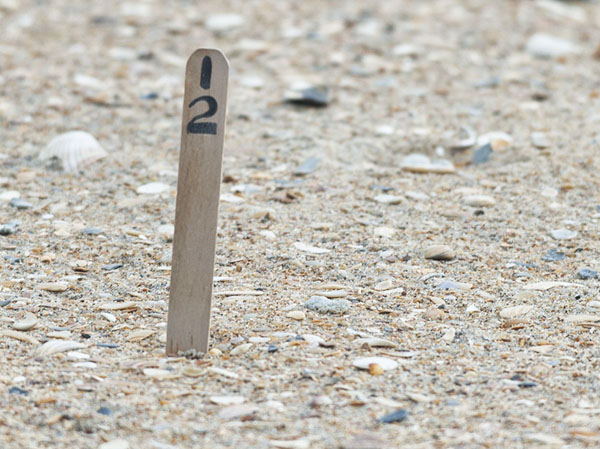 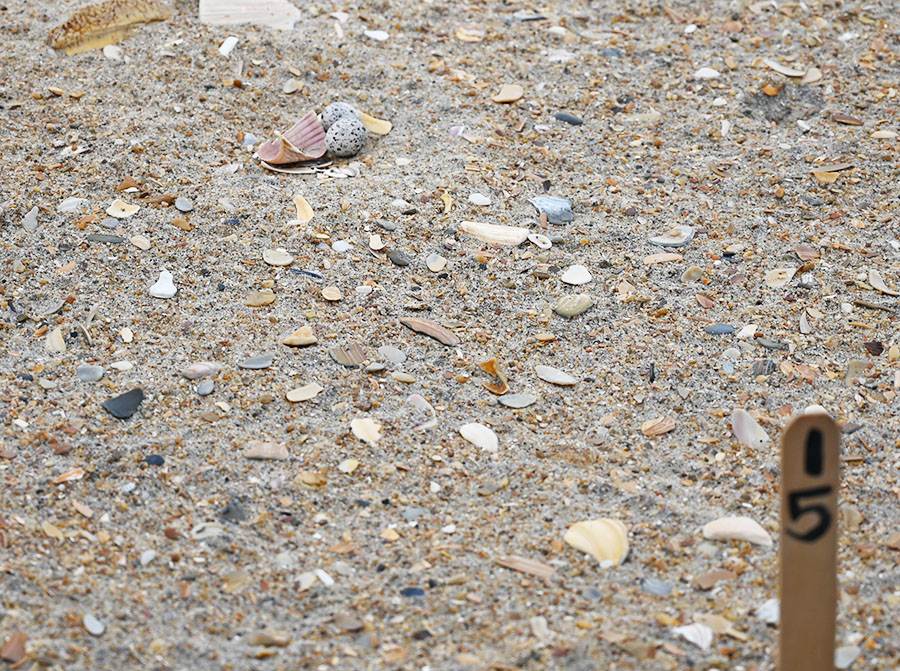 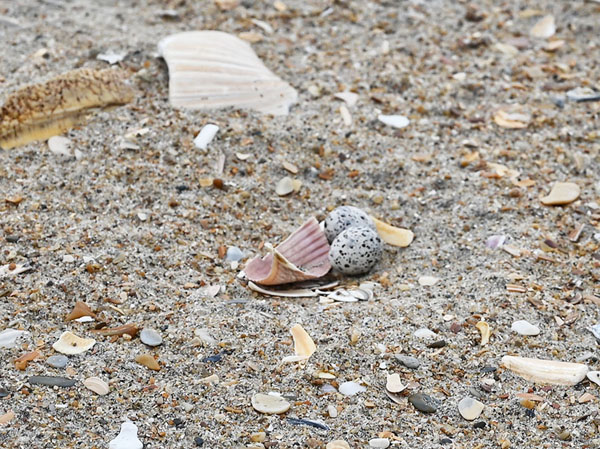 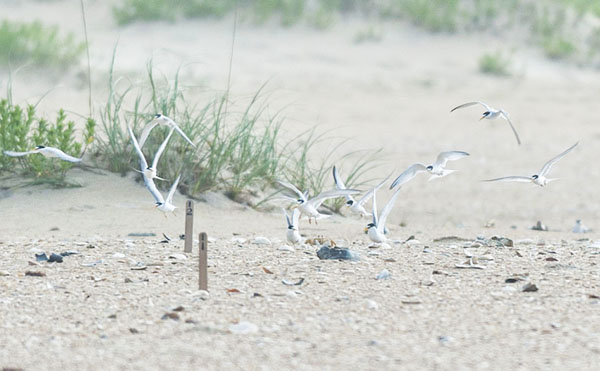 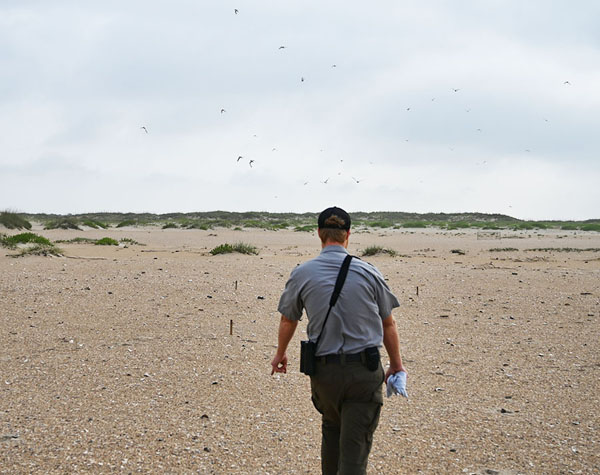 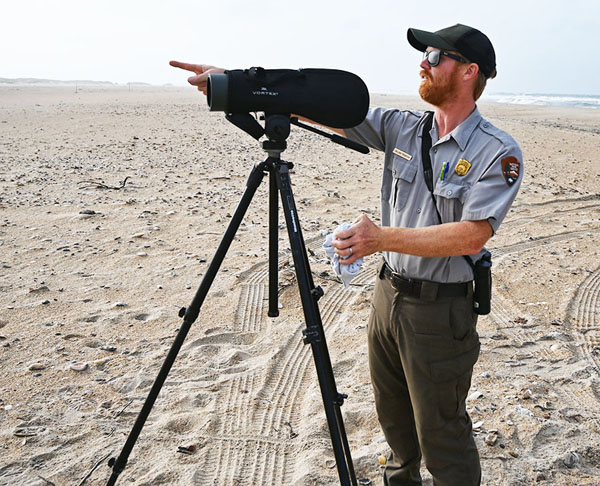 Shorebird nesting season is in full swing, and for a .45-mile stretch of shoreline sandwiched in between South Beach and Cape Point, least terns rule the terrain.

In the past few weeks, a colony of roughly 538 least terns with a total of 269 nests have set up a temporary residence in this corner of the Cape Hatteras National Seashore (CHNS), and when it comes to a successful nesting season, these colonial birds inherently subscribe to the theory that there is strength in numbers.

Least terns begin their nesting season close to the foreshore, or the strip of sand in between the high and low tide lines. Over the course of a few days, the males will try to impress their potential mates by flashing or waving fishes, (and other attention-grabbing behaviors), before the terns pair off and make their way higher up the beach.

When it’s time to nest, the least terns will retreat to the shell beds well past the high tide line, where the scattered mounds of shell pieces provide the perfect camouflage for the birds themselves, as well as the eggs to come. The least terns start to scrape out their potential nest sites in the sand before deciding on the ideal location, and settling in for the wait to come.

And when hundreds of least terns start to cluster together, with nests literally a foot or two away from each other, the beach becomes a noisy place to be.

Nesting season in Buxton started early and swiftly in 2019, with least terns spotted close to the ocean wash in the initial stages of courtship around May 1. By May 5, there were 150 scrape sites nestled within the nearby shell beds, and by May 25, the first chicks were spotted among the more than 250 makeshift nests scattered around the sand.

It’s a large number of nests to be sure – especially for one single colony – but it’s not a record breaker just yet.

“The least tern colony near Cape Point in 2013 topped this year,” says CHNS lead biological science technician William Thompson. “During that year, there were 329 least tern nests recorded. But this is the second highest number we’ve had since 2010.”

On the last day of May, Thompson is quietly watching the action from behind the lens of a telescope, and with the constant activity of some 500 birds, there’s plenty to see.

One member of each least tern pair – the dad or mom – diligently sits on the “nest,” which is just a shallow imprint in the sand that’s barely visible.  The other parent forages and looks for food for the couple, and the pair may switch roles as the day goes on.

The least terns work in teams of two when it comes to nest sitting and collecting food, but when there’s a predator in the midst of the populated colony, that’s when the group mindset kicks in, and the terns come together to protect their turf.

As Thompson steps away from the telescope and walks closer to examine the Popsicle sticks that mark 25 of the nests – a pilot observation program aimed to track individual nest success as opposed to the success of the overall colony – the formerly quiet atmosphere is shattered. Dozens of least terns take to the air, shrieking loudly at the intruder, and suddenly start to dive bomb the area surrounding the new human arrival.

Least terns have a number of predators, including ghost crabs, raccoons, possums, and also humans, but they also have an interesting line of defense. Working together as a colony, least terns will form groups and “dive bomb” larger predators, hopefully scaring the interloper away from their nests, eggs, and chicks. They don’t make contact with their enemies like other types of birds, (most notably the common terns which can literally draw blood if they get too close), but their maneuvers that are straight out of a certain Alfred Hitchcock movie are generally more than enough to scare away any unwelcomed company.

Smaller predators receive a different but similar defense. On this May morning, a group of least terns can be spotted in the distance clustering around a ghost crab and raising their wings as they bully the crab away from the scene. Again, there’s no physical contact – just an aggressive shooing that eventually convinces the ghost crab to relocate to another stretch of shoreline.

“Predators, like ghost crabs, are actively after the eggs, but there is definitely strength in numbers,” says Thompson. “The entire colony mobs the predator, and makes [the area] very unpleasant for them.”

And when the least terns do lay their eggs, and wait for 21-23 days for the eggs to incubate, the shelly bed setting provides another defensive tactic for the colony.

Identifying a least tern nest that has an egg or two can be a difficult venture. Not only are there no twigs, grasses, or any foreign materials to mark the existence of a nest – only sand – but the speckled and slightly grey eggs are almost impossible to see among the countless broken shell pieces and equally gray sand. Measuring just a couple of inches at most, the eggs lay unprotected and invisible when the tern takes a rare moment to depart the nest, and their indivisibility is a bonus when it comes to predators like raccoons who are actively looking for an egg buffet.

If the eggs are lost to a predator, or lost for any other reason, the least terns will start the process over, beginning with the oceanside courtship, and will try again until mid-June when the nesting season naturally winds down.

When the chicks do hatch, it takes roughly 21-22 days for the new arrivals to fly and leave the nest, but the least terns tend to “come home” and return to the same areas year after year.

Tracking least tern activity is more difficult than tracking oystercatchers, piping plovers, or other types of shorebirds, simply because there are so many. Non-colonial birds like oystercatchers can be banded and tracked for years at a time, with the same couple identified in certain locations year after year. In fact, an oystercatcher couple was consistently recorded in the Sandy Bay area of Hatteras Island for 12 years in a row, until one of the birds was hit by a car earlier in 2019, and subsequently passed away.

But least terns are a different story. Because there are hundreds in a certain area, it’s hard to tell if the pairs stay together for the long haul, if there are romantic rivalries along the way, or if the same birds are returning to Hatteras Island every year.

“They all work together to protect the colony and to take care of the chicks, but it appears there is some pair fidelity,” says Thompson.

It’s hoped that the monitoring of the 25 marked nests at the Buxton colony will provide a little more insight into survival rates and how buffers or predators play a role in the nests’ success, but for now, it’s all about the group.

As one cluster of least terns make precision dives towards Will, and another cluster fends off another approaching ghost crab with their wings angled high into the air, it’s a multi-pronged effort to ward off the wave of critters encroaching on the colony.

And while the number of least terns is hovering near 2013’s record, (and especially in this small area of Buxton), there is one notable difference between 2019 and 2013 – the number of miles that are open to human visitors.

“In 2013 during this week, there were 8.3 miles of beach open to ORVs on Hatteras Island, or roughly 52% of the [shoreline that’s open to vehicles],” said Michael Barber, Public Affairs Specialist for CHNS. “Today, that number is 15.1 miles, or 95%.”

“It’s been a successful balancing act this year – 95% of the beaches are open to ORVS, and it’s also a very strong nesting season.”

In a few weeks, the least terns will leave for a winter in the Caribbean or some other warm spot, the shell beds will be deserted and reclaimed by avid Buxton beachcombers, and the activity – and the noise – will return to the bare minimum within this .45 mile stretch of sand.

But for now, with hundreds of least terns, 269 nests, and dozens of chicks hatching on a weekly if not daily basis, the least tern colony in Buxton is brimming with activity. By holding true to their strength in numbers philosophy, the least terns can hopefully keep the predators at bay, until the next generation of least terns are born.

With multiple reports of vehicles getting stuck or driving on the beach without a permit over the past few weeks, the National Park Service (NPS) is urging ORV drivers to observe the rules of the off-road before exploring the roughly 25 miles of Cape Hatteras National Seashore that are open for 4WD vehicles. Independence Day [...] Seashore News |  Full Article

Standing water from days of heavy rainfall has led to challenging driving conditions at several popular beach accesses on Hatteras Island. As of June 17, the rain gauge at the Billy Mitchell Airport in Frisco indicated that the region’s rainfall is approximately 15 inches above normal for mid-June, due to wet weather that inundated the [...] Seashore News |  Full Article

A plan to issue a Special Use Permit (SUP) to Dare County to utilize a privately-owned hopper dredge to perform maintenance dredging within Oregon Inlet has been approved by the National Park Service (NPS). In compliance with the National Environmental Policy Act, the NPS adopted an Environmental Assessment (EA) drafted by the United States Army [...] Seashore News |  Full Article

The Outer Banks Network for Endangered Sea Turtles has added another $2,500 to the reward leading the to the identity of the driver who ran over and killed a nesting loggerhead sea turtle in Frisco on Memorial Day. Along with the Cape Hatteras Access Preservation Alliance, the reward for information in the turtle’s death is [...] Seashore News |  Full Article

Early on Wednesday morning, Cape Hatteras National Seashore staff caught video footage of a loggerhead sea turtle returning to the ocean after nesting on the shoreline, per a recent social media update. The loggerhead sea turtle is the primary nester on Hatteras and Ocracoke islands, although the isolated beaches also attract a few green turtles [...] Seashore News |  Full Article