“I am happy that so many people have been able to visit and enjoy the Seashore and the local communities within Dare and Hyde counties during the first 10 months of 2021,” said David Hallac, superintendent, National Parks of Eastern North Carolina. “Not only is this year the busiest ever, but it is also likely to be the first time that America’s first national seashore reaches three million visits in a single year.” 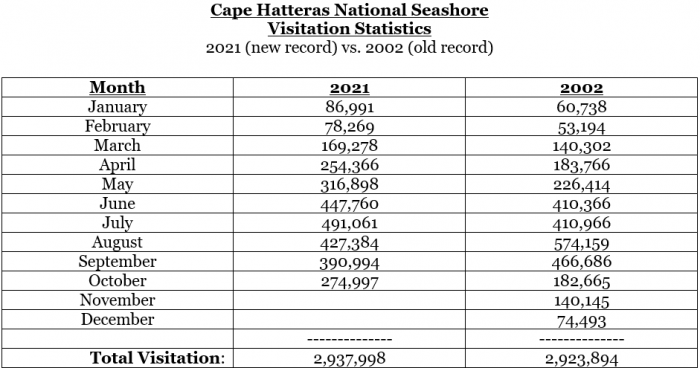 Seashore visitation estimates are collected by counting southbound vehicles just north of the Basnight Bridge and using a multiplier to estimate the total number of passengers heading south. Those estimates are added to the number of passengers going to Ocracoke Island from Cedar Island and Swan Quarter.
Full-year visitation data for the Seashore, Fort Raleigh National Historic Site and Wright Brothers National Memorial will be released early next year.