“I am very impressed with their progress, especially in light of the myriad efforts they are making to help the village recover from Hurricane Dorian,” he said in an email.

The removal process got a speed boost a few weeks ago when debris removal via the Hatteras Ferry was approved. That pushed the debris removal end date to the first week in April, including the large amount of vegetative debris that is being stored next to the NPS campground.

As of Tuesday, the pile of debris in the Lifeguard Beach parking lot was a fraction of what it was after Ocracoke village began the arduous task of cleaning, making house repairs and getting rid of the massive amount of material destroyed by Hurricane Dorian which struck the island on Sept. 6.

Halllac indicated that once the debris is removed from the public beach access parking lot, some pavement repairs and resurfacing may need to occur.

“Our goal is for Hyde County and the NPS to complete that work in a manner that avoids or minimizes impacts to Seashore visitors,” he said. “We aim to have the parking area at least partially open to the public by around mid-April.”

The new restroom facility at that location has had its shares of delays for various reasons, including the impact of the hurricane. The target for reopening the restrooms is by Memorial Day. It will take more time to complete the shower and decking, but the Park Service will maintain the temporary shower facility.

The next challenge will be to remove the massive amount of vegetative matter, which includes hundreds of downed cedar trees, stored along Ramp 68 at the NPS campground. 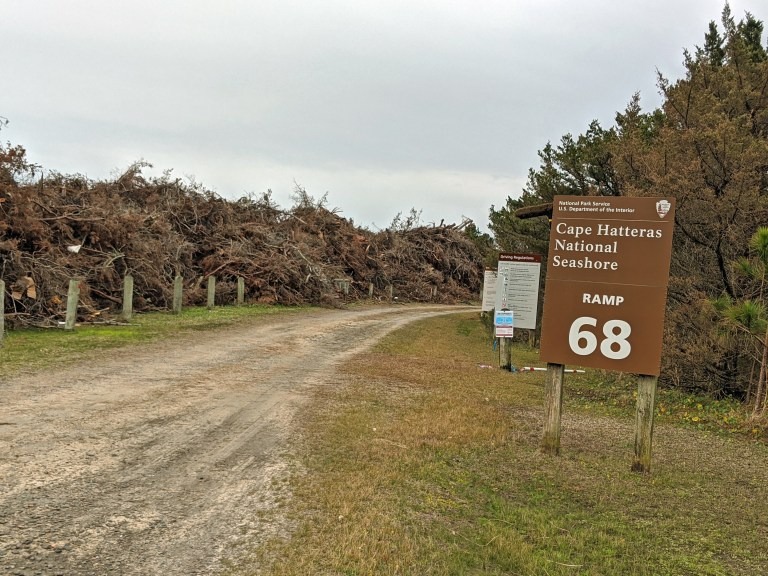 In other NPS news, the restrooms at the Ocracoke Visitor Center across from the long-route docks in the village reopened last week. The center, which includes a gift shop and the island’s ORV beach permit office, will not open this summer due to extensive flood damage.

Since 2015, the Seashore has experienced a yearly increase in visitation compared to the previous year. 2019 visitation was 0.60 percent higher than visitation in 2018.

With multiple reports of vehicles getting stuck or driving on the beach without a permit over the past few weeks, the National Park Service (NPS) is urging ORV drivers to observe the rules of the off-road before exploring the roughly 25 miles of Cape Hatteras National Seashore that are open for 4WD vehicles. Independence Day [...] Seashore News |  Full Article

Standing water from days of heavy rainfall has led to challenging driving conditions at several popular beach accesses on Hatteras Island. As of June 17, the rain gauge at the Billy Mitchell Airport in Frisco indicated that the region’s rainfall is approximately 15 inches above normal for mid-June, due to wet weather that inundated the [...] Seashore News |  Full Article

A plan to issue a Special Use Permit (SUP) to Dare County to utilize a privately-owned hopper dredge to perform maintenance dredging within Oregon Inlet has been approved by the National Park Service (NPS). In compliance with the National Environmental Policy Act, the NPS adopted an Environmental Assessment (EA) drafted by the United States Army [...] Seashore News |  Full Article

The Outer Banks Network for Endangered Sea Turtles has added another $2,500 to the reward leading the to the identity of the driver who ran over and killed a nesting loggerhead sea turtle in Frisco on Memorial Day. Along with the Cape Hatteras Access Preservation Alliance, the reward for information in the turtle’s death is [...] Seashore News |  Full Article

Early on Wednesday morning, Cape Hatteras National Seashore staff caught video footage of a loggerhead sea turtle returning to the ocean after nesting on the shoreline, per a recent social media update. The loggerhead sea turtle is the primary nester on Hatteras and Ocracoke islands, although the isolated beaches also attract a few green turtles [...] Seashore News |  Full Article