Future possibilities for restoring and rehabilitating the Cape Hatteras Lighthouse were outlined at a lightly attended public meeting on Tuesday evening, September 28, in Buxton.

Led by David Hallac, National Parks of Eastern North Carolina Superintendent, the meeting was an opportunity for the National Park Service (NPS) to present the three primary options to enhance the lighthouse and the surrounding grounds. These options include several big potential improvements, such as the replacement of the lighthouse beacon, extensive landscaping projects, and adding historical elements to bring the iconic structure back to its original 1870 glory.

The lighthouse project has been in the works for years, and the NPS has already received funding for the upcoming repairs and enhancements. The items that need to be addressed originally stemmed from the results of a 2014 Comprehensive Condition Assessment Report, and a later 2016 Historic Structure Report.

Earlier in 2021, a team of historical architects, engineers, specialist contractors, and personnel from the State Historic Preservation Office and the Cape Hatteras National Seashore got the ball rolling by removing the interior paint throughout the lighthouse – stripping the structure to its bare-bones brick interior – and identifying several surprising issues along the way.

Now, the stage is set for the big next steps to be taken, which includes an overhaul of the ragged terrain bordering the lighthouse, extensive repairs to the metalwork and other inherent features, and the replacement of the famous beacon with either the original 1854 Fresnel lens, (which is currently housed at the Graveyard of the Atlantic Museum in Hatteras village), or an identical-looking replica.

Hallac outlined some of the damage that was uncovered during the paint removal process, such as deep cracks or patches of stucco-like material that had apparently been used at some point in the past 150 years to repair some sort of unknown issues. “Our historic architects are starting to both literally and figuratively dig into these problems, and help us understand what should we do next,” said Hallac.

But on a grander scale, Hallac also noted that in addition to repairs, a good chunk of the upcoming work will likely focus on replacing many of the lighthouse’s modern additions with more authentic elements.

“Part of this project’s goal is to have as much of the original lighthouse restored as possible,” he said. “We’re seeking to fix all these issues, but also put these character-defining elements [from 1870] back into the lighthouse.” A prime example is the future replacement of the current light at the top, which is currently a modern beacon from around the 1950s.

“The landscape is also in disrepair,” he added later in the presentation, showing photos of the worn paths and patches of sparse grass that indicated years of heavy foot traffic. “So we are looking at ways to improve visitor circulation around the landscape, and restore the landscape… Additionally, we will be adding a replica fence around the keepers’ quarters, and will be enhancing the interpretive [displays] so visitors can have a much more immersive experience, and learn more about what they’re seeing.”

Though the overall lighthouse restoration project has been steadily progressing over the past several years, the current step in the process is in the public review phase, and at Tuesday’s meeting, Hallac presented the three main options available:

Alternative One: No action at all. Hallac stated that due to the extensive repair work needed, and the funds already available, the “No Action” option was highly unlikely. Regardless, this option includes the following:

Alternative Two: Improvements to Landscape and Lens. Alternative Two is the more modest of the two “action” options when it comes to the landscape, and includes the following: 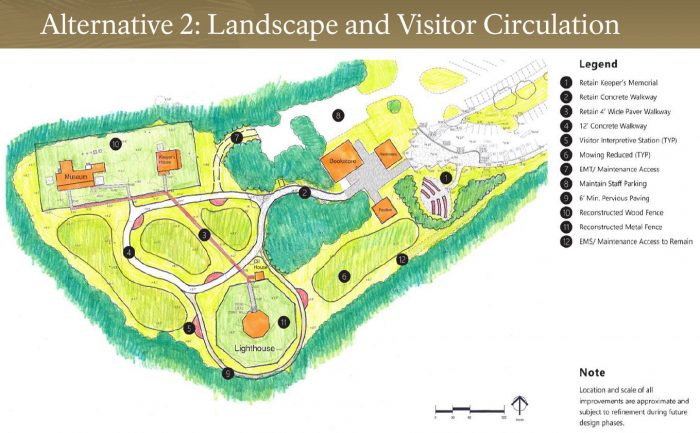 Alternative Three: Comprehensive Improvements. This option has several distinctive differences from Alternative Two, such as more elaborate landscape alterations, and returning the original Fresnel lens to the lighthouse, as opposed to creating a replica. Alternative Three includes the following: 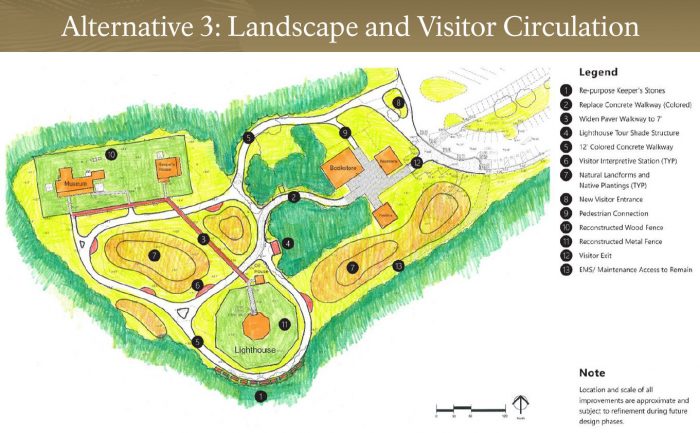 Both Alternatives B and C will also include the following:

Hallac stated that the exact timeframe for either of the two action options is somewhat unknown, but he expected the upcoming repairs and renovations to take a minimum of 24 months. “When we’re looking at scheduling, we’ll try to do it as quickly as possible, but we also don’t want to rush it,” he said. “It’s going to take some time, and we will also probably see a few ‘surprises’ that will [need to be repaired as well], just as we did when taking the paint off.”

The public comment period is a total of 30 days, from September 17 to October 17.

After assessing the public’s feedback on the proposed alternatives, an environmental assessment will be performed, and hopefully released by the end of the year. Then, there will be another 30-day public review period before a final decision is made on the preferred alternative in the spring of 2022, followed by contractor bidding. “We hope to have the project underway around this time in 2022,” said Hallac.

Comments can be submitted electronically at https://parkplanning.nps.gov/caha_lighthouse, or can be mailed to Cape Hatteras National Seashore, ATTN: Superintendent, 1401 National Park Dr., Manteo, N.C. 27954. The deadline to submit comments is Oct. 17, 2021.

Last month, Cape Hatteras National Seashore, Fort Raleigh National Historic Site and Wright Brothers National Memorial were collectively awarded an Open OutDoors for Kids grant of $7,400 from the National Park Foundation. The goal of the grant program is to provide K-12 students, educators and families with access to national parks around the country through [...] Seashore News |  Full Article

Beginning on Oct. 25, the Ocracoke Beach Access parking lot, (located just north of Ocracoke village), will be closed for approximately one week for a paving and repair project conducted by a Hyde County contractor. The parking lot will receive a 1.5-inch overlay of asphalt and new striping as part of a project to repair [...] Seashore News |  Full Article

Seasonal ORV access for beaches in front of the villages of Hatteras Island will reopen for the off-season on Friday, October 15. These routes, which run parallel to the villages of Hatteras, Frisco, Avon, and the Tri-villages, open to ORVs annually in the winter months when the visitor population is lower. The routes are closed [...] Seashore News |  Full Article

A project to improve the Frisco Bathhouse and Beach Access site just south of Frisco village has been making big strides since initially launching on September 15, per a recent update from the Cape Hatteras National Seashore (CHNS.) The $896,506 project, which will improve both the parking and restroom facilities at the popular site, was [...] Seashore News |  Full Article

Future possibilities for restoring and rehabilitating the Cape Hatteras Lighthouse were outlined at a lightly attended public meeting on Tuesday evening, September 28, in Buxton. Led by David Hallac, National Parks of Eastern North Carolina Superintendent, the meeting was an opportunity for the National Park Service (NPS) to present the three primary options to enhance [...] Seashore News |  Full Article

From ORVs to rising seas

Reminder: Two meeting will be held this week on the Cape Hatteras ...

Cape Hatteras National Seashore (Seashore) is preparing a plan for a project to repair the Cape Hatteras Lighthouse and surrounding landscape. The public can assist the Seashore in identifying issues, concerns and opportunities to be considered as part of an environmental assessment. The public comment period is 30 days, starting Sept. 17 and ending Oct. [...] Seashore News |  Full Article

Cape Hatteras National Seashore (Seashore) is preparing a plan for a project to repair the Cape Hatteras Lighthouse and surrounding landscape. The public can assist the Seashore in identifying issues, concerns and opportunities to be considered as part of an environmental assessment. The public comment period is 30 days, starting Sept. 17 and ending Oct. [...] Seashore News |  Full Article

Night driving reopens, and other National Seashore updates for the ...

The Cape Hatteras National Seashore (CHNS) announced several recent updates and news items related to recreational activities and seashore conditions on Hatteras and Ocracoke Islands. News items and events related to the National Seashore for the week of September 15 include the following: Seashore Updates Night driving (24 hours a day) will be allowed at [...] Seashore News |  Full Article

The Cape Hatteras National Seashore (CHNS) hosted 427,384 visitors in August of 2021, making it the busiest August at the Seashore since 2002. Visitation totals for January-June 2021 were 26% higher than the first six months of 2002, the year that currently has the distinction as being the busiest year on record. With 491,061 visits [...] Seashore News |  Full Article

National Seashore updates and events for the week of September 6

National Seashore events and updates for the week of August 26

National Seashore updates for the week of August 19

National Seashore updates for the week of August 6