The Storm and its effects

Hurricane Dorian has left its mark on many areas of our parks and caused hardships for our communities and staff.

Park staff put in an amazing effort to prepare the parks consistent with severe weather plans and made extra efforts to protect vehicles, equipment, buildings, historic structures, and natural and cultural resources. The National Park Service secured locations for staff to evacuate from park housing and showed strong support for the inter-agency efforts led by Dare and Hyde Counties. I represented the National Park Service on the Dare and Hyde County Control groups and I really appreciate the leadership, organization, and partnership shown by our county partners.

Many NPS staff worked during the storm as part of the Dare County Emergency Operations Center and in the field assisting the Dare and Hyde County Sherriff’s offices.

Fort Raleigh National Historic Site and Wright Brothers National Memorial have trees down and shingles missing from some structures, but the parks generally escaped with only minor impacts. Both parks reopened at 9 a.m. on September 10. Park trails at Fort Raleigh remain closed as of the morning of September 10.

The effects of the hurricane were most significant to park areas and communities on southern Hatteras Island and Ocracoke. Over the last two days, I met with staff, citizens, business owners, and county partners and visited most areas of both Hatteras and Ocracoke Islands. The islands appear to have experienced up to 7 feet of water above the ground in many residential and park areas.

Shortly after the Dare County Control Board meeting on Saturday I traveled the length of Hatteras Island with Dare County partners and provide you with the following assessment:

The dunes were generally intact and beach erosion was unremarkable. Remnants of the storm surge, a surge that many say rivaled the surge during Hurricane Mathew, became increasingly clear the further south we traveled. Most of our visitor areas suffered minor to moderate impacts. Many homes and businesses between Buxton and Hatteras Village were flooded and the high water marks showed several feet of water in some structures. The Cape Hatteras Secondary School was badly flooded and the Superintendent of Schools reports that 1/3 of the structure is damaged.

transmission network. As they always do, the North Carolina Department of Transportation was ahead of the game; their highways staff tirelessly removed sand from the roads, rebuilt protective dunes, and restored transportation to the island very quickly. Some of our NPS employees or their families and friends may have experienced major flooding, especially in Hatteras Village and we will do what we can to support them.

As I rode the ferry from Swan Quarter on Sunday with Chief Ranger Boone Vandzura and dozens of emergency response staff, the Red Cross, and disaster volunteers from around the country, the mood was somber and the gravity of the situation was intense. District Ranger Ed Fuller brought me through residential neighborhoods to show me the devastation that most of our staff and Eastern National staff have experienced in their homes. In many cases, everything our staff and Ocracoke residents owns was flooded by several feet of water from Pamlico Sound. I counted over 130 flooded vehicles just in the NPS parking lot across from the Visitor Center; certainly, there are hundreds more on the island. These impacts are serious. We will do everything we can to give our Ocracoke staff the time they need to take care of their families and recover. Please keep them in your thoughts.

Highway 12 on Ocracoke near Southdock is badly damaged along two 500 foot sections, rendering the road unusable. I watched waves break over the crumpled asphalt during the high tide. We have numerous meetings with NCDOT over the next two days to put our heads together and find a way to restore transportation, but it will take time. This will impact people’s lives. Something as simple as going to the grocery store, doctor, or a high school sports game has now gone from an hour ferry ride to a two 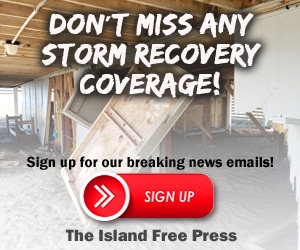 and a half hour boat ride plus travel time from Swan Quarter to a nearby city. I am grateful for the dedication of NCDOT’s ferry division. Their efforts to help islanders evacuate and now bring emergency responders to the rescue has been impressive.
Cape Lookout National Seashore and Moores Creek National Battlefield

I have been in constant communications with Superintendent Jeff West at Cape Lookout. Jeff’s staff are safe and recovering from storm impacts. His preliminary assessments show major impacts in locations such as the Long Point cabin camps and historic Portsmouth Village. The National Park Service’s Eastern Incident Management Team will also be supporting Cape Lookout in their assessment of damages and stabilization of park resources. Superintendent Mathew Woods reports that the Moores Creek National Battlefield team is also safe. The park came through with very few impacts and we are grateful that they have been able to resume normal operations. We will continue to work together to support each other over the coming weeks and months.

The EIMT has brought in a team of staff including a hotshot crew that have already done amazing work to remove downed trees and other debris around FORA and in Buxton. Yesterday, they delivered vehicles and generators to Ocracoke and will set up a spike camp on Ocracoke to support recovery efforts. Park staff are now working side-by-side with Hyde County and N.C. officials and emergency managers on Ocracoke Island. Teams have already begun assessments of the park areas including roads, buildings, lighthouses, beaches and dunes. All of these efforts are vital to allowing the park to open for safe and enjoyable experiences to the public.

I have directed the recovery team to focus on the following priorities:

1. Accountability and safety of our staff,
2. Assisting Dare and Hyde Counties with humanitarian efforts that support local communities,
3. Initiating assessments, and
4. Reopening parks and areas to America’s public.

Please keep an eye on the tropics; while we are relieved that Dorian has passed, storm season is still upon us and we will plan and prepare again if we need to protect the parks and get our team out of harm’s way.

Please visit the park websites, Facebook pages and Twitter accounts for updates to continued closures and areas that we are able to safely open to the public.

The Cape Hatteras National Seashore (CHNS) is pleased to announce that they are working with their lessee at Oregon Inlet Fishing Center, Oregon Inlet Marinas, LLC, to develop strategies to replace vulnerable structures and conduct site improvements at the marina. As such, members of the public are invited to provide input via https://parkplanning.nps.gov/oregon_inlet_fishingcenter by January 10, [...] Seashore News |  Full Article

The Cape Hatteras National Seashore has issued a Special Use Permit to Tideland Electric Membership Corporation (EMC) for a project that will improve the reliability of electric service to Ocracoke Island by replacing an overhead pole line with an underground cable along Pole Road in Hatteras, North Carolina.  The project is expected to begin in [...] Seashore News |  Full Article

The Cape Hatteras National Seashore (CHNS) announced several recent updates and news items related to recreational activities and seashore conditions on Hatteras and Ocracoke Islands. News items and events related to the National Seashore for the week of December 6 include the following: Seashore Updates A ribbon-cutting event for the new hunt blind/wildlife-viewing platform on [...] Seashore News |  Full Article

Cape Hatteras National Seashore is one of ten sites featured in a new national report by The Cultural Landscape Foundation that was unveiled in late November. The “Landslide 2019: Living in Nature” report highlights ten cultural landscapes throughout the nation that are threatened by flooding, wildfires, regional drought and other effects of human-induced climate change. [...] Seashore News |  Full Article

Visitors with limited mobility will be able to use the new Architectural Barriers Act (ABA) accessible hunt blind and wildlife-viewing platform to hunt waterfowl during authorized dates starting December 14. All Cape Hatteras National Seashore (Seashore) visitors can use the platform to participate in wildlife-viewing, educational, and photography opportunities during the hunting off-season, which is [...] Seashore News |  Full Article

National Seashore Reopens to Ocracoke Visitors on Dec. 2, But Some ...

Ocracoke Island and the Cape Hatteras National Seashore (CHNS) will reopen to visitors on December 2 per a Wednesday decision from the Hyde County Commissioners, however, some CHNS facilities will remain closed due to damage from Hurricane Dorian. Per a Thursday morning press release from CHNS, visitors to Ocracoke Island should be aware of the [...] Seashore News |  Full Article

The Cape Hatteras National Seashore will be hosting a free Winter Lighthouse Climb on Saturday morning, December 14, from 9:00 a.m. until noon. Traditionally, the lighthouse is seasonally closed from the end of Columbus Day Weekend in October until late April, but this holiday event allows the public one last opportunity in 2019 to catch [...] Seashore News |  Full Article

National Seashore Updates for the Week of October 10

National Seashore Updates for the Week of October 4

Routes in front of villages reopen Oct. 15, Transition to night driving in process

National Seashore Updates for the Week of September 26

National Seashore will open most Hatteras Island visitor areas at noon on Thursday; Avon Pier will open at 8:00 a.m.

National Seashore Updates for the Week of August 29