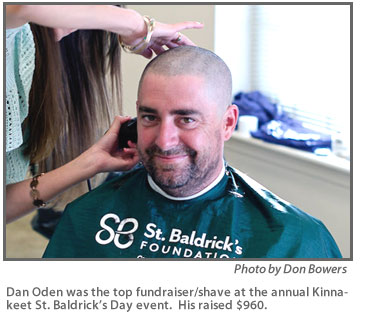 At first glance, the crowd gathered at the Avon Fire Station on Saturday, March 15, appeared to be celebrating St. Patrick’s Day a bit early, but something was missing amidst the green T-shirts, accessories, and tasty treats — namely, hair.

The event was, in fact, the eighth annual Kinnakeet St. Baldrick’s Day fundraiser, which raises money for childhood cancer research by shaving the heads of participants.

About 25 shavees shed their shaggy ‘dos in a show of solidarity with the children who lose their hair during chemotherapy.

And most of them were repeat participants, observed event organizer Jennifer Harmon.

“I think it touches everybody,” explained Harmon’s father, Gary Price of Avon, who has lost a family member to cancer and has shaved his head for the charity for the past two years.  “It’s a great cause and, any time I can participate in an event like this, I want to do it.”

Mike Fahey, a resident of Frisco, first went bald for the cause last year and also noted the many familiar faces at the event.

“It’s a good event because you tend to see some of the same people from year to year,” said Fahey over the hum of the hair clippers.  “There’s continuity to it.”

Fahey values this consistency and attributed it, in part, to the fact that the St. Baldrick’s Foundation encourages active participation in the fundraising events, rather than relying on blindly mailed donation requests.

Fahey plans to continue his involvement in the future and hopes “to get the family to pitch in” to sponsor him each year so that it becomes a family charity.

A strong sense of family and community support prevails throughout the vast majority of events on Hatteras Island and the annual St. Baldrick’s fundraiser is no exception.

As the “shavees” received their buzz cuts, friends and family members crowded around, snapping photos, and chuckling at the temporary mohawks created during the shaving process.

There were also quite a few father-and-son duos spotted at the event.

Elwood Westcoat, who owns Dawn’s Hair Salon (soon to be named Salon Jobell) in Buxton, began his involvement in the event as it grew and the organizers sought out local hair stylists interesting in volunteering.

Shortly thereafter, Elwood’s interest in the fundraiser led him become a shavee.

“It’s a good cause,” remarked Elwood, “at it seems like a neat way bring the community together to help out with cancer research.”

This past Saturday marked his third year as a participant and, for the first time, his 13-year-old son, Jeffrey, joined him.

While Jeffrey embraced his first baldheaded experience, for many men, this was their first haircut since the 2013 fundraiser

Thus, the local hairstylists performing the shavings — Chloe Sapecki, Tabitha Rose, and Denise Gaskins – made sure to remove a few mustaches and beards and trim some eyebrows during the event, as well.

To learn more about the Kinnakeet St. Baldrick’s event, go to the website, http://www.stbaldricks.org/events/mypage/447/2014.