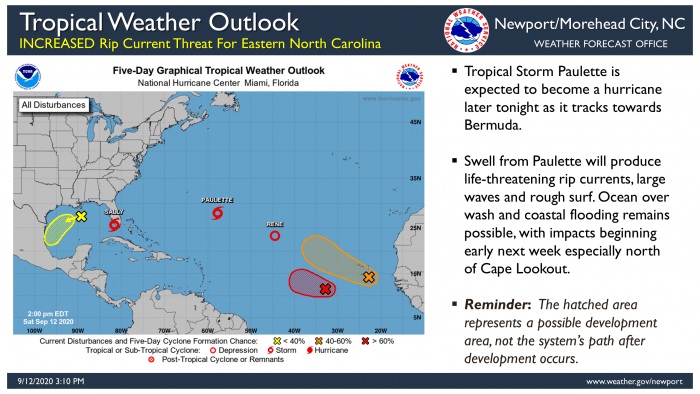 Hatteras and Ocracoke islands will continue to see impacts from Paulette along area beaches next week, which includes life-threatening rip currents and potential ocean overwash and coastal flooding, per a Saturday afternoon update from the National Weather Service (NWS) Newport / Morehead City office.

Tropical Storm Paulette, which is predicted to become Hurricane Paulette later tonight, will remain well to the east of coastal N.C., but the storm will create a long period swell producing life-threatening rip currents, large waves, and rough surf.

Because Paulette coincides with elevated high tides, ocean overwash and coastal flooding remain possible, especially north of Cape Lookout. The timing of potential coastal flooding is currently early into mid-week, however, residents reported some erosion and elevated surf around high tide on Saturday afternoon on Hatteras Island, and particularly in Avon and Buxton.

The next high tide is at approximately 4:00 a.m. on Sunday morning.

As of 2:00 p.m. on Saturday, the center of Tropical Storm Paulette was located near latitude 28.0 North, longitude 57.8 West. Paulette is currently moving toward the northwest near 15 mph (24 km/h).

A northwest or west-northwest motion is expected through late Sunday, followed by a turn toward the north with a decrease in forward speed on Monday, and a northeastward motion on Monday night and Tuesday. On the forecast track, the center of Paulette will move near or over Bermuda on Monday morning.

Maximum sustained winds are currently near 70 mph (110 km/h) with higher gusts. Strengthening is forecast, and Paulette is expected to become a hurricane later today or tonight.