The Ocracoke Advisory Planning Board at its April 13 meeting voted to ask Hyde County to put a moratorium for several months on approving food truck applications for Ocracoke.

This would have to be approved by the Hyde County commissioners preceded by a public hearing.

A meeting of the planning board will be held at 3:30 p.m. Thursday (May 5) in the Ocracoke Community Center. Board Chair Corky Pentz said the issue of a moratorium will be on the agenda.

The reason for the moratorium is because the regulation governing these businesses is vague and Hyde County Health Department has received three requests for permits, it was reported.

However, a check with Roni Collier of the Hyde County Health Department, who inspects food service concerns, said there are no pending food truck permit applications.

“Every spring I’ll get quite a few requests and they think they’re going to park at the Lifeguard Beach,” Collier said. She tells them that’s NPS property and they have to be the ones permitting that and then she no longer hears from them.

Currently, the only food trucks on Ocracoke are Eduardo’s, Suazo’s Taqueria, the recently opened Kayla’s Country Kitchen, and Old Salt Sandwiches and Such, which, she said, technically is a “food stand.” She said she will discuss these and the different state regulations at the meeting.

True food trucks need to be mobile while adhering to state health regulations.

Some of the food trucks already on the island have placed picnic tables outside, which invite customers to sit and linger. So, does that make them a restaurant? some local restaurateurs have asked.

If so, they need adequate parking (one parking space for every four-top), the same as all the other fixed-site restaurants do.

And is there adequate septic for patrons?

These are questions the board tossed about that need a lawyer’s attention.

“It’s beyond the scope of this board to rewrite the regulation without a comprehensive plan,” said Garrick Kalna.

This issue is part of the growing pains the island has undergone in the last two years as more houses have been built and visitors wanting to escape the COVID-19 pandemic flooded the island last year and in 2021.

“It’s getting tricky,” said Sue O’Neal, one of the board members. “We have growing pains, but we can’t just let it be a free for all.”

Parking all over the island is an issue, but it’s especially acute around some of the food trucks.

“I want to talk to DOT for possible no parking signs where there are safety issues suggested by local law enforcement,” said Ocracoke’s commissioner Randal Mathews. “We know local businesses use the right of way but there is a lot of pedestrian traffic, so we need safe areas on the shoulders.”

The planning board deals with the Ocracoke Development Ordinance and is in the process of reviewing this document. 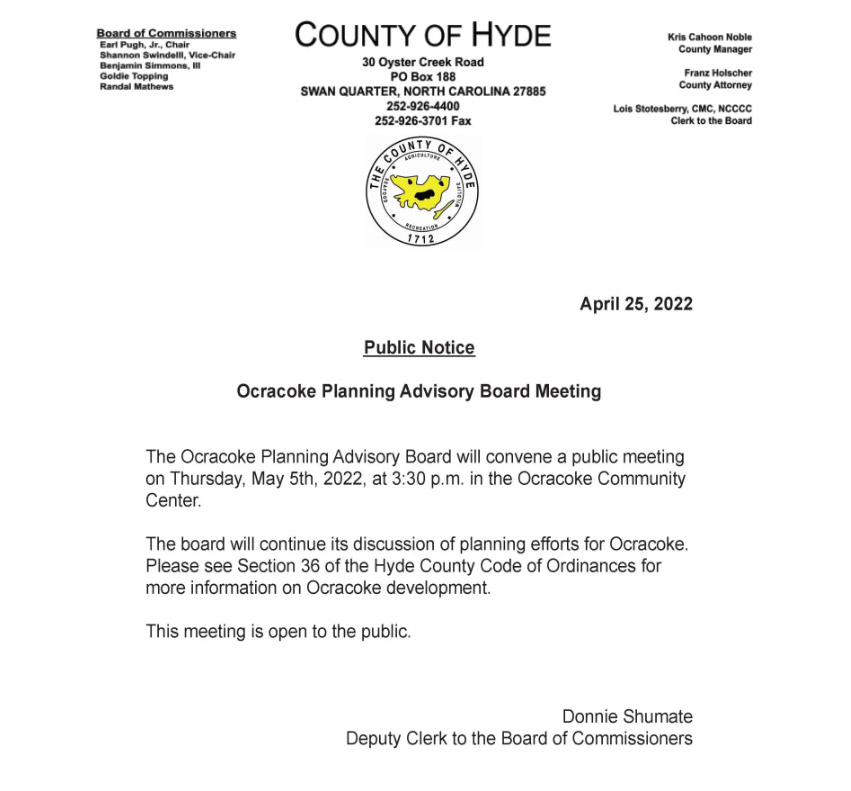