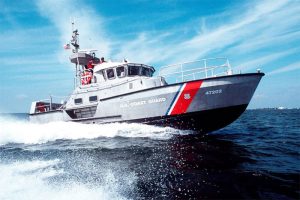 The Coast Guard pulled two mariners from the water after their vessel sank on Tuesday night, and is currently searching for the other two crewmembers in Pamlico Sound, North Carolina, Wednesday morning.

Once on scene, the aircrew located two of the four crewmembers and transferred them to Sentara Albemarle Hospital in Elizabeth City for further medical care. Both mariners rescued were hypothermic and one required CPR, who was later pronounced dead by hospital personnel.

A first light search was conducted Wednesday morning by Coast Guard Air Station Elizabeth City aircrew members with negative results. A 47-foot Motor Lifeboat crew from Station Hatteras Inlet, along with the North Carolina Wildlife Resources Commission and a good Samaritan vessel by the name of Aubrey Niel, are continuing to search.

“This is a rough case and as we continue to search, our thoughts are with the families of the mariners,” said Matthew Brooks, search and rescue coordinator for the case. “We’re grateful for the EPIRB that was activated during the case, which enabled us to get resources on-scene as quickly as possible. A properly registered EPIRB is a vital and highly-recommended piece of equipment for mariners to have on their vessels.”