As you might expect, the most frequently asked question that my Realtor colleagues and I are hearing these days is – “What impact are the COVID-19 related restrictions having on the Hatteras Island real estate market?” This article is intended to provide some insights into the answers to this question.

To begin the discussion, we first need to identify which restrictions are having the most significant ramifications for the island’s real estate market. I think there would be very little disagreement if the restrictions on non-resident property owner and visitor access to Dare County were pinpointed as the most important factors influencing the day to day conduct of the real estate business.

To establish a common understanding of the time frame that we are analyzing, non-resident visitor entry into Dare County was prohibited on March 17. Three days later on March 20, non- resident property owners were restricted from entering the county.

Next, we need to determine which measures of real estate performance might provide us with the most accurate picture of what has been happening in the market during the past month and a half. I should like to propose that the number of properties under contract to be sold(pending sales) and new sales could serve as benchmarks by which to measure the changes that have taken place so far during this time of uncertainty.

Let’s begin our exploration with a broad overview of the number of residential properties and unimproved lots that were under contract to be sold between the week ending March 19 and extending through the week ending on April 30. The following graphic provides a visual picture of these trends. 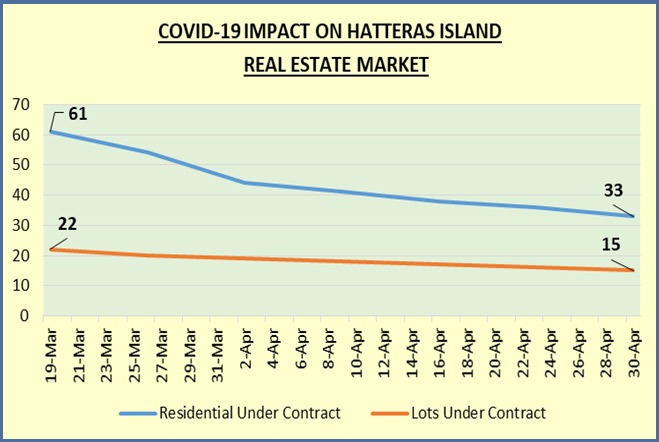 At first glance, the raw numbers show that the residential properties under contract declined by 46 percent and the undeveloped lots under contract were 32 percent lower. On an absolute, standalone basis, this conclusion would be accurate. However, the important underlying question is – “How much of these declines were attributable to COVID-19 related causes?” This is where the story gets more interesting and more complicated.

In the cycle of real estate transactions, the time between a buyer and a seller finalizing a contract for the sale of a property and the date when the transaction actually closes is normally around 45 days. Therefore, at the beginning of the period when restricted entry into the county was first enacted, the number of properties under contract to be sold was actually reflective of sales that may have taken place as long as 45 days earlier. During the intervening time from mid-March until the end of April, existing transactions were being finalized, new properties were being placed under contract, and some properties that were under contract were terminated for various reasons – a complex interplay of factors to say the least.

When we dig deeper into the data, we find that during the period being studied, 42 residential properties and 9 undeveloped lots were sold. In addition, there were 17 new residential sales, and it appears that 3 of the properties under contract were terminated before the deed was transferred from the buyer to the seller. The corresponding data for the undeveloped lot market segment showed that 2 new properties were placed under contract.

The 800 pound gorilla in the room associated with these results is that we have no way of knowing exactly how many new sales might have taken place if there had not been any restrictions on the entry of non-resident owners and visitors into the county. Nevertheless, we can get some idea of the strength of the market by looking at the preliminary closed sales figures for the month of April 2020 in comparison to April 2019. I think the general expectation would be that residential sales would be lower. In fact, the unofficial number of home sales was 25 percent higher this year than in April of last year, and the total dollar value of sales was 12.2 percent ahead of April 2019! Moreover, the major market indicators for undeveloped lot sales were all significantly higher than in April of last year.

Given the statistical results that we have examined, it is important to recognize that real estate has not stopped on Hatteras Island as a result of the COVID-19 pandemic. Real estate activity, while diminished, has actually been reasonably resilient up to this point. Buyers are still buying, and sellers are still selling. Agents both locally and nationally have adjusted to the unusual market environment by taking their business to a virtual level. They are using technology to advertise and show properties and to complete contract documents electronically without their clients having to be physically present.

A word of caution – while it is important to analyze the market data, it would be irresponsible if we only looked at real estate statistics without acknowledging the amazing fact that, to date, there has been only one death from COVID-19 in the county during this period of restricted entry and other health related limitations. However, there has clearly been a tremendous amount of economic hardship experienced as a result of the restrictions. I suppose it will be up to the historians and ethicists to determine the overall benefit or loss during this challenging period for the island.