This week, I want to give a shout-out to my old friends, Dewey and Mary Parr, who today closed their “retirement dream,” a shop called the old Gray House in Buxton.

It’s a sad time for Dewey and Mary and for all the many friends they have made in the past 25 years, but they knew, at age 85, it was time to move on to a new retirement plan.

Dewey grew up mostly on Hatteras Island in the old Gray House, which then belonged to his uncle, Kendrick Gray. During World War II, Dewey’s father was sent to Huntington, W.Va., as a Navy recruiter. After the war was over, Dewey’s parents returned to Hatteras Island — his mother was an island girl. Dewey stayed in Huntington, where he met and married the love of his life, Mary, and pursued his career in education. Dewey served as teacher, principal, and central office administrator. Mary was an accountant at Marshall University.

Mary also loved crafting, and, as a retirement gift, Dewey gave her the Old Gray House, so she could pursue her passion with the artwork and crafts that she sold in the shop. Meanwhile, Dewey took over the outside part of the property, turning it into an entity all its own, with plantings and pathways and little buildings, many of which housed the shells that were Dewey’s passion and that he sold to visitors.

“The whole idea was not to make money,” Dewey said this week.

The idea was to meet people — folks who loved Hatteras. Mary shared her love of crafting and Dewey shared his love of shells. Dewey also has a passion for Hatteras Island and its culture and history, and he loved sharing that with visitors most of all.

And the visitors just kept coming. 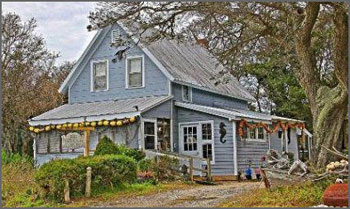 “We had a great time,” Dewey says. “We didn’t care if they bought anything or not.”

Visitors — and locals — just loved the place and couldn’t get enough of visiting with Mary in the store and sitting with Dewey on the swing under the old oak tree.

My grandchildren especially loved visiting “Mr. Dewey” and “Ms. Mary” at The Old Gray House. The granddaughters liked making their way through all of the rooms of the old house and examining all the cool crafts that were for sale.

But what all of my grandkids — and many other youngsters — loved most was touring the grounds with Mr. Dewey and hearing the stories of life on the island in the old days. Then he would show them many of his prized shells, and, like the educator he was, he would tell them stories of the shells — where they came from and how they caught their prey. He’d share a few legends along the way to really impress the little ones.

“The kids have been the wonderful part for me,” Dewey says.

I first met Dewey in 1996 when I was the editor of another island publication. He sent me an essay that he wrote on change and progress. I really liked it and published it.

Then I stopped by the Old Gray House to meet Dewey and Mary and urged him to write more about his childhood on Hatteras, which he did. It was the start of a wonderful relationship that only ended when I left the publication and Dewey was really too busy to keep on writing so much.

Dewey says the Old Gray House and the property are for sale — but not the business.

And how could it be replicated?

Today, I am republishing that original essay that Dewey wrote on the Community News and Commentary Page. In addition, I invited Dewey to write a “postscript” to the original essay about the change he’s seen in just the past 20 years.

I hope you enjoy Dewey’s views on life on Hatteras — past and present — as much as I have.

Here are the articles:

An Essay on Change and Progress

A Postscript on the Essay on Change and Progress

Also, Dewey and Mary still have a Facebook Page for now, where you can learn more and keep in touch with them. The link is https://www.facebook.com/Old-Gray-House-Gifts-and-Shells-330934495469/?fref=ts.