On Dec. 21, the National Park Service published in the Federal Register its final changes to the off-road vehicle rule for the Cape Hatteras National Seashore that became effective five years ago next month — in February 2012.

Three of the  changes addressed areas that Congress mandated the Park Service to re-examine in its final rule — the morning opening of the beaches, the dates for seasonally open ORV routes, and the size and location of vehicle-free areas (VFAs).

Park officials added of their own accord issues that they thought should also be  addressed — and that they thought the public wanted addressed. Those included ORV permit durations and ORV access, especially access to soundside areas on Ocracoke and Cape Point.

An environmental process — including a formal environmental assessment document and public meetings — was necessary for the process of making the changes.

The process started in August of 2015 and ended with the Federal Register publication. The rules will be effective about Jan. 20.

You can find the details of the changes on the on the Beach Access and Park Issues Page.

Here I want to talk about getting to Cape Point, which involves the size and location of the VFAs — which have turned out to be one of the most controversial parts of the ORV rules.

There is a VFA south of Cape Point which prohibits ORVs from driving there from Ramp 48 or 49 in Frisco or the old Ramp 45 at the back of the Cape Point Campground.

In other words, if the northern ORV route to the Point is impassable from ocean overwash or beach erosion, drivers can no longer get to the area from the south.

I should note that this is not a late spring and summer problem since the VFA area is a favorite of nesting shorebirds and turtles and is closed for most of that time.  It is especially a problem in the non -nesting season when the area might otherwise be open if it were not a vehicle-free area.

The northern ORV routes from Ramps 43 and 44 in Buxton have been under assault from the ocean this fall and winter, perhaps worse than in the past few years but it’s been a long-time problem.

At times, it’s been both difficult and dangerous for folks trying to reach Cape Point, a favorite fishing, shelling, and gathering place on Hatteras.

There is a short “bypass” route that takes traffic around the back of the primary dune — but it has needed for some time to be extended when there is serious beach erosion between the Buxton ramps and the Point.

The original environmental assessment presented by the Park Service called for an extension of the bypass road approximately one-quarter mile to the north to Ramp 44, so vehicles can travel from the ramp much of the distance to the Point behind the overwash area.

However, seashore superintendent David Hallac says that the erosion has worsened in the area and park officials took another look after the public process– and decided to add another 600 feet to the bypass road — extending it to the south of the Salt Pond at the Narrows. The seashore calls it a “minor modification.”

This extension is noted on Page 3 of the FONSI (Finding of No Significant Impact) document that was signed just before the rule changes were published.

Here is what the FONSI says:

In other words, the bypass route will be longer and take drivers further to the south toward the Point.

“Although this southern extension was not originally part of the preferred alternative in the EA, impacts associated with this proposed 600-foot extension will be similar in nature to those disclosed in the EA for the 0.4-mile extension to the north. There would be no measurable or observable impacts to federally- or state-listed species, special status species, or non-listed shorebirds associated with the 600-foot bypass route extension and no wetlands would be impacted.” 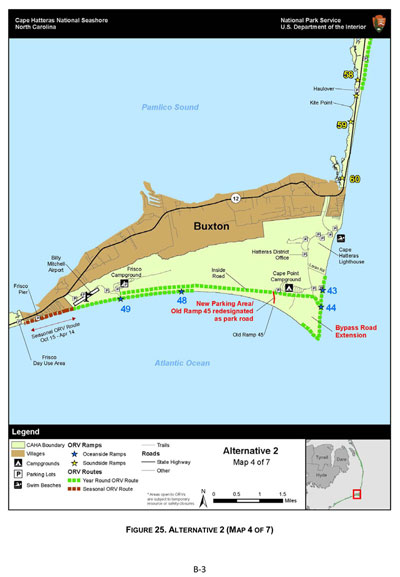 It’s not exactly what most ORV users would like — they want a route from the south through or behind the VFA or Salt Pond or whatever it takes.

That is not going to happen now, but Hallac also notes Paragraph 3 on Page 3, which says:

Now, folks are going to be quick to criticize this plan. And, yes, a new planning process will take a while.  It won’t happen overnight.

However, consider that these final rules changes took basically 16 months from the first public scoping meeting in August 2015 until they were published Dec. 21, 2016.

It strikes me as a good thing that the park is recognizing there may be more to do to keep Cape Point accessible.

Hallac says it’s a recognition of adaptive management and changing conditions in the seashore.

“The National Park Service is committed to adaptively managing the seashore for changing conditions,” he says. “And if there is one thing I have learned in my two years here is that things are always changing.”

I think it’s worth noting the modifications to the changes and giving the seashore some credit for making them.

Did you lose your wedding ring near The Point at Cape Hatteras National Seashore? A Northern Virginia couple found a men’s gold band on the beach back in 2019, and they’ve been trying to return it to its owner ever since. If the ring is yours, you lost it on Friday, Nov. 1, 2019, between [...] Local News |  Full Article

Some students in Hyde and Swain counties will soon be able to access high-speed internet via satellite technology, thanks to a pilot program aimed at improving internet access to support remote learning. The North Carolina Department of Information Technology (NCDIT) Broadband Infrastructure Office (BIO) and the Friday Institute at NC State University are leading the [...] Local News |  Full Article

The Coast Guard assisted four mariners after their vessel began to take on water in the vicinity of Oregon Inlet, Saturday. Watchstanders at Coast Guard Sector North Carolina received a report via VHF Channel 16 from the operator of the pleasure craft Hawg Hunter, that his vessel began to take on water from the stern [...] Local News |  Full Article

It’s been a year since the “Ocean Pursuit,” a commercial scallop boat, wrecked in Oregon Inlet. The 73-foot-long steel-hull ship ran into shallow water along the northern edge of the navigation channel on March 1, 2020 and the crew had to be airlifted to safety by U.S. Coast Guard helicopter. Since then, the Ocean Pursuit [...] Seashore News |  Full Article

Dare County announced 7 new positive COVID-19 test results on Thursday, March 4, bringing the total number of cases in the county since the pandemic began to 2,796. With Thursday’s new cases, the current number of active cases in the county is now 33. The 7 additional cases are all residents and include the following: [...] Local News |  Full Article