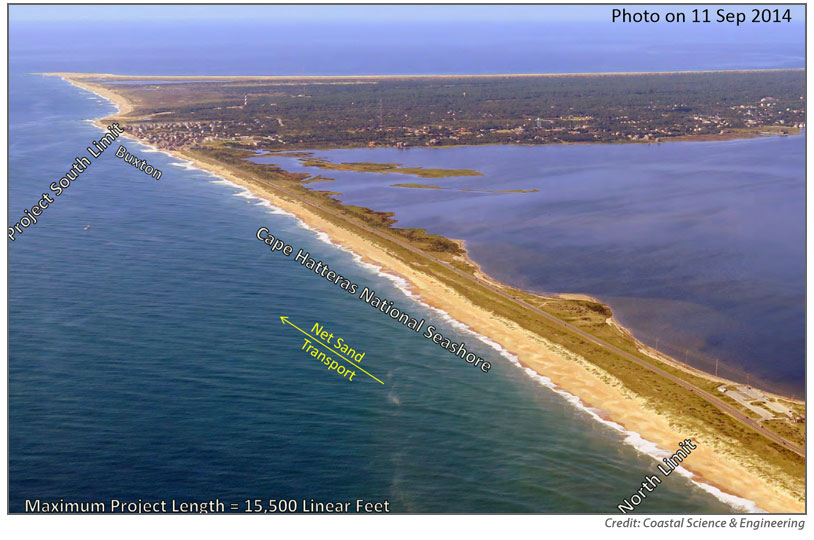 The Dare County Board of Commissioners voted 4-2 on Monday night, Feb. 15, to move forward with the creation of a service tax district that would include 34 oceanfront properties in Buxton to help pay for beach nourishment that is planned for this summer.

Tonight’s vote allows county staff to prepare a report and map on the service district and set a public hearing.

No tax rate was included in the motion, and commissioners made it clear in discussion before the vote that they did not expect the small number of Buxton oceanfront properties to pay the approximately 25 percent of the cost that has been paid by Nags Head property owners and will be paid by property owners in Duck, Kitty Hawk, and Kill Devil Hills for their planned projects.

Dare County’s planned beach nourishment project in north Buxton is expected to cost between $20 to $27 million.

“Nobody is suggesting that we have (35) property owners come up with $5 million,” Overman said.

In the long discussion about creating the special tax district, it was clear that the majority of the board members felt that it was only fair that Hatteras islanders be asked to pay something for the project.

“The intention is put a little bit of fairness into the game,” said Boswell.

Judge, who was chairman of the board when the decision was made to pursue beach nourishment said, “When we started out, the fund would carry it.”  Meaning, that in the beginning of the project, the commissioners intended to pay for it all from the beach nourishment fund, which is, in turn, funded by a 2 percent countywide occupancy tax.

However, even though most commissioners favored taxing some on Hatteras, deciding whom to tax proved much more difficult.

Perhaps one reason for that is because in applying for a special use permit from the National Park Service, the county said the reason for the nourishment project was to protect Highway 12 from the encroaching Atlantic Ocean.

At a town hall meeting with the commissioners last week, many of the 28 speakers opposed the creation of the tax district.  They felt, as many other Hatteras islanders do, that protecting the highway is a job for the North Carolina Department of Transportation, not Hatteras Island taxpayers.

At last night’s board meeting county manager Robert Outten gave the board a hand-out that outlines the process for establishing a special tax district for beach nourishment and some options that are available to them. It’s the same hand-out he gave them at the board’s Nov. 16 meeting when the tax district was first discussed and at the board retreat last Thursday.

Outten said that to begin, the commissioners had to decide if they are going to create a special service district for Buxton beach nourishment.  In doing this, they must consider population, property values, tax rates, ability of district to pay, and any other matters that have a bearing.

That requirement, he said, would make it difficult to include all of unincorporated Dare County since it would be hard to argue that taxpayers in unincorporated Dare — for example, Stumpy Point — would receive more benefit than those in incorporated areas of the county, such as Southern Shores.

The longer the discussion continued, the more difficult it seemed to become to decide on which taxpayers will be  included in the special district.  It was noted during discussion that all of Hatteras would benefit from the nourishment, but then so would all of the county in an indirect way.

Outten repeatedly told the commissioners during the discussion that the more narrowly they define the district, the easier it is to defend it in court, if necessary.

“Narrower will be easier,” he said.

“I get nervous when you get too big,” he said at another point.

The commissioners then began to focus on the Buxton oceanfront with some discussion of whether the service district should include all of the property owners in a triangle defined by Highway 12, the oceanfront, and Old Lighthouse Road — all properties prone to overwash in storms.

Outten and county staff will prepare a report and map on the service district for the commissioners, and a public hearing could be set for as soon as the first board meeting in April — on April 4.

In the discussion, several commissioners noted that changes could be made after a public hearing, so the motion approved last night is not necessarily “the final word.”

He also said in an e-mail that the rate for the service district would be decided when the county budget is set.  Like a fire district tax, he said, it would be set annually and go into effect with the annual budget.

Just before the discussion of how to pay for beach nourishment in north Buxton, Dr. Tim Kana, of Coastal Science and Engineering, the company the commissioners hired to plan the project and get it permitted, gave the board an update on the project.

The plan for the project is to nourish 2.9 miles of beach between the Haulover area north of Buxton and the old site of the Cape Hatteras Lighthouse with 2.6 million cubic yards of sand that would be pumped from a borrow pit about 1.8 miles offshore from the old site of the lighthouse.

Kana said that the project is still on schedule for pumping sand late spring or early summer.

The project is waiting on a special use permit from the National Park Service, which is expected to be issued in late February or early March.  After it has the Park Service’s permit, the U.S. Army Corps of Engineers can issue its permit — the last one needed.  That is expected to happen in March or early April.

After that, the schedule gets really ambitious. Assuming all permits are received, projects would be put out for bids in early April with bids due April 28. The commissioners would be scheduled to approve the contract at its May 2 meeting with a construction agreement and other documents also finished in May, so sand can be pumped by Sept. 2016.

The project cannot be done after September for reasons of safety and economy.  During the stormy season, the dredging days would be limited by weather and the project would take twice as long, Kana said.

Kana made reference to the fact that when bids were opened last Tuesday, Feb.9, for three projects on the northern beaches, all were considerable over budget and none could be done in the summer months because of the high demand for dredges. Those three projects are going to be put out for bid again soon.

Kana offered hope that the Buxton project would be small enough for some dredge company to “fit it in” among its other summer projects or that the combination of the three town projects plus Buxton would be large enough to get the attention of a company that would be willing to do it in the summer.

“I know there will be a lot of people disappointed if we can’t do it this summer,” Kana said, “but as you found out last Tuesday when bids were opened…it may be beyond our control.”

Click here to see the hand-out that the county manager prepared for the board on creating a service district.