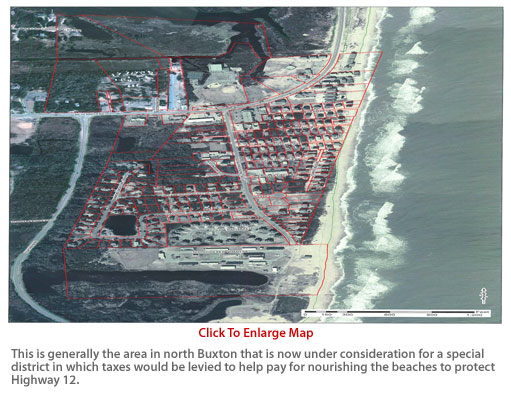 The Dare County Board of Commissioners this morning heard from six property owners  at a public hearing on establishing a special tax district on the Buxton oceanfront to help pay for beach nourishment but took no action on the proposal.

Instead, the board decided to pursue expanding the special district — from 35 oceanfront properties to perhaps as many as 255 in north Buxton.

In order to expand the district, the board will need more information.  In addition, it will have to produce another report justifying the district with a map and set another public hearing, giving four weeks notice to property owners.

The board is under time constraints to get the district established so it can begin collecting taxes to pay for the nourishment project during the next fiscal year, which begins on July 1.

The commissioners have set a special meeting for Wednesday, April 13, at 5 p.m. to discuss how to proceed with an expanded proposal for a tax district.

Dare County proposes to nourish 2.9 miles of beach from approximately the Canadian Hole/Haulover Area to the old site of the Cape Hatteras Lighthouse with 2.6 million cubic yards of sand from an offshore borrow pit. The reason for the nourishment project is to protect Highway 12 from destructive storm surges.

According to a report prepared on the special tax district, the estimated total cost of the project is $25 million or $9.62 per cubic yard of sand.  The proposed project, the report said, would be funded by a combination of the county’s beach nourishment fund and from revenues generated from a county service district made up of all oceanfront properties in the project area.

One town in the county, Nags Head, has already nourished its beaches and three others plan projects for next year.  Those projects are being partially funded by the county’s beach nourishment fund, but taxpayers in the cities are shouldering part of the cost.

Outten has told the commissioners that 7.82 cents per $100 of property value is about the average tax that property owners in Nags Head and the other towns have paid for nourishment. If the board decides to levy an 8-cent rate in the Buxton special tax district, the total that Buxton oceanfront property owners would contribute would be slightly more than $13,000 of the total bill.

However small the contribution, the majority of the commissioners have said they view the establishment of the district as a matter of fairness. The vote to establish a proposed district was 7-2 with Commissioners Warren Judge and Allen Burrus voting against.

At this morning’s hearing, the six speakers generally accepted the idea of paying more to protect their properties, which is not the stated goal of the nourishment project but would be a by-product of widening the beach.

In answer to questions, county manager Bobby Outten said that the nourishment district, once established, would remain in place indefinitely but would be looked at annually by the board to determine a tax rate.

The board does not have to establish the tax rate at the same time it establishes the district. To begin taxing by July 1, however, the board would have to decide the amount of the tax increase during the current budgeting cycle.

The county is hoping to nourish the Buxton beach this summer, but that depends on getting a bid for the work that meets the county’s estimated budget.  The project is out for bid now.  Bids are due later this week. The possibility remains that the project would have to be postponed until next spring and summer.

Immediately after the public hearing and Outten’s answer to questions, the commissioners weighed in with many, if not most, favoring some sort of expansion of the district, which is a possibility that was raised back in February when establishing the district was first discussed.

“I believe the area should be expanded,” Commissioner Jack Shea said to begin the conversation.

“I have a little heartburn about just (including) the oceanfront,” Commissioner Beverly Boswell noted.

At first the discussion centered on expanding the special district to include all properties in a triangle bordered by Highway 12, the Atlantic Ocean, and Old Lighthouse Road.

Then, Commission Chairman Bob Woodard said he saw “some benefit” in expanding the district to include some properties west of Old Lighthouse Road in the area of Diamond Shoals estates.

Here’s a breakdown of the additional properties under consideration now by the board:

The total number of properties now in play for a special tax district is 255 with a total value of about $70 million. All of the properties probably would not be included in one special district, but there would be multiple districts in which property owners would benefit from the nourishment at different levels and pay increased taxes at different rates.

Part of today’s discussion involved which property owners are most harmed by storms, overwash, and beach erosion and will, therefore, benefit the most.

Outten noted that it is much easier to show that property owners in the triangular area of north Buxton are regularly flooded out and damaged after storms than property owners farther from the ocean.

Since the board is pressed for time, the commissioners decided on a special meeting on April 13 to sort out many questions.  Outten and other county officials will be collecting information for them between now and next week, including how often properties west of Old Lighthouse Road are flooded or damaged in storms.

If the commissioners decide they want to expand the special district at next week’s meeting, the county will have to publish a new report and maps and set a new public hearing with at least four weeks notice.  All property owners within a proposed district must be notified by mail.

None of the commissioners at today’s meeting expressly opposed expanding the special district.  Hatteras Island Commissioner Allen Burrus was absent for health reasons.

However, Commissioner Warren Judge did say that he hopes there will be a discussion at the next meeting of how far the board intends to go and how much money it expects to raise in a special tax district.

The towns are looking at a roughly 75-25 split, with property owners paying 25 percent of the tab.

If the Buxton project costs the estimated $25 million, one-quarter of the cost is about $6.25 million.  The commissioners made it clear again today that they do not expect Buxton property owners to shoulder anywhere near that amount.