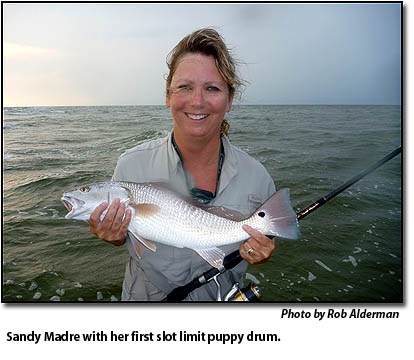 It’s the goal of the IFP and its writers to continue to provide the most information about the islands that you consider being your heaven on earth.

The dog days of summer are not always known for being the prime time for area fishing.  However, the fishing hasn’t been all that bad in recent days.

Oregon Inlet Fishing Center reported a great billfish bite, with a lot of white marlin being caught. Lots of bailer dolphin are being raised, and the occasional larger dolphin has been taken – up to 53 pounds. Scattered wahoo and tuna have also hit the docks.
The inshore boats out of Oregon Inlet have had awesome catches of large red drum almost daily, with great catches of blues and Spanish mackerel to boot. Nice catches of amberjacks have been reported, and a fair albacore bite has been going on recently.

I was unable to obtain a decent report for the beaches of Oregon Inlet or the catwalk on the Bonner Bridge.

There were some fair catches of small sea mullet and spot along Pea Island beaches.

From the beaches in the tri-villages and Ramps 23-30, there has been a great bite of puppy and yearling drum. The reports have been that a lot of these drum have had to be released because of their size. There has even been a couple citation drum released in recent days.

Small sea mullet, flounder, and spot have also been caught using bloodworms, cut bait, and sand fleas. A citation pompano was registered over the weekend.

A most rare catch of an 18-inch mahi-mahi was reported. It was taken on a bottom rig. What a surprise that must have been!

The Rodanthe pier has seen some small bottom fish, including sea mullet, spot, croaker and flounder. The occasional early morning and late evening bluefish and Spanish mackerel bite has occurred on gotcha plugs.

My friend informed me that a rare, small sailfish made an appearance in their live baits off the end of the pier and was chasing gotcha plugs, though it was never hooked. While this sort of fish is not seen often from an inshore pier, it does happen and sometimes they are caught.

The beaches from Ramps 34- 38 have seen scattered small sea mullet and pompano, along with scattered puppy drum and flounder. Scattered bluefish and Spanish mackerel have been taken from shore using metal lures and cut bait.

Avon pier reported slow fishing with the occasional small bottom fish being taken and a couple of quick runs of bluefish.

Buxton area beaches and Cape Point has seen some nice sized and small sea mullet and pompano. A few puppy drum have been thrown on the sand, and a few 2- to 3- pound bluefish runs have occurred in the early morning and late evening. A scattered Spanish mackerel has been caught, but their overall bite has been slow from shore.

Frisco beaches have had some small sea mullet and pompano, with no recent citations of either being reported. Scattered bluefish have been caught on both cut bait and lures.

Hatteras beaches have been slow overall recently with some scattered bluefish, sea mullet and pompano being reported.

The Hatteras offshore fleets have had some great billfish action that has been consistent and exciting. The bailer dolphin fishing has been hit or miss, with some days being better than other days. A scattered wahoo has been taken, and bottom fishing has produced good catches of tilefish and grouper.

The inshore Hatteras fleet has been doing very well with their catches of Spanish mackerel, bluefish, and gray trout. Speckled trout and puppy drum are scattered.

Ocracoke did have a fair bite of small sea mullet, but most other fish have been scattered and slow.

I personally continue to spend all of my fishing time in my kayak, and it has paid off considerably. Daily limits of 2- 4-pound bluefish, with some scattered Spanish mackerel mixed in.

On Friday of last week I saw more tarpon on Diamond Shoals than I saw in three days of chasing them in the Florida Keys—and I saw a lot of tarpon in the Keys. I managed to hook one on a top water popper, but it didn’t last very long. Live baiting for one was out of the question, as the sharks were so thick you could walk on them.

A recent kayak trip in the sound produced a couple puppy drum and a couple large bluefish, including a citation 15-pound, 2-ounce.

So, as you can see, the fishing is not all that bad and it is not all that great. However, the extended forecast for the islands is for fair, warm weather, with light winds that will change direction almost daily.

If you are not already scheduled to come down this weekend and you have a little time and funds on your hands, this would be a good time to come on down and visit one of local marinas to make up a charter or to go by a local tackle shop and pick up what you will need for a day of pier or surf fishing.

Until next week—tight lines and fair weather.