The canine deputy is only a year and a half old and still in training to detect narcotics: marijuana, opioids, methamphetamine, cocaine and MDMA (a form of ecstasy).

With illegal drugs, the deputies follow the “plain view” doctrine.

“If we can see it, it opens the door,” Warner said.

Rocky is under a “plain sniff” doctrine: If he’s somewhere and smells illegal drugs, the deputies can act.

“He can be outside the vehicle (during a traffic stop), and (would be able to) smell drugs inside,” Warner said.

Although Warner declined to give details, he said that Rocky recently helped find marijuana with the National Park Service rangers. 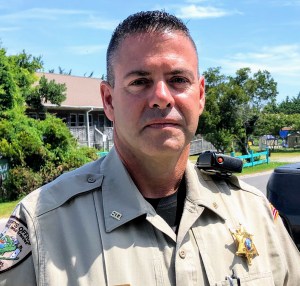 Another job Rocky will be trained to do is to track, both people and objects for evidence recovery.

While Rocky is friendly, Warner stresses that people should not run up to him and try to pet him, as they shouldn’t with any working dog. Approach Warner first.

Rocky joins another new deputy of the two-legged variety, Jay Neal of Nags Head, who joined the force at the end of May.

Neal, a former police officer in Nags Head, most recently worked on the Hatteras ferry for the last three years.

“I like the atmosphere here,” he said about his new job on Ocracoke.

“The rules are right in front of them–on a yellow sheet on the front windshield,” said Deputy Rob King. “We get a lot of calls from citizens, but even if something is happening, it still takes five minutes to get there.”

In addition to numerous golf cart warnings, the deputies dealt with the following issues from May 16 to June 15:

One communicated threat; one dog attack on cats in which one was killed (the dog was removed from the island); one DWI; four minor motor vehicle crashes, none with injuries; two hit-and-runs to vehicles; and two chapter 90 offenses (possession of marijuana).

There was one unattended death. Warner explained that the deputies must make a report if the person was alone to rule out foul play.

There was one animal bite to a child from Bob, an Ocracat who lives around the Methodist Church and Ocracoke School.

“It’s better not to pet Bob the Cat,” Warner said, as he can be unpredictable, especially when too many people gather around him and try to pet him.