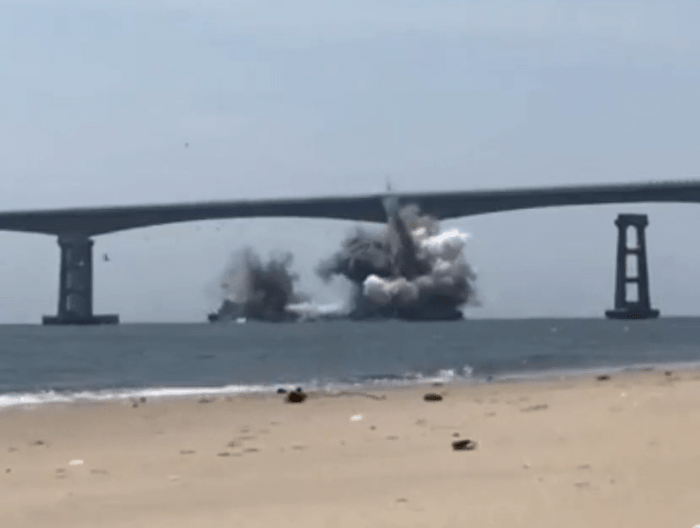 The last remaining section of the navigation span of the Herbert C. Bonner Bridge over Oregon Inlet was finally taken down Thursday using explosives.

Efforts to blow-up the remaining steel and concrete structure were delayed the previous two days due to winds and waves.

The bridge was being dismantled piece-by-piece by workers with PCL Constructors, which built the replacement Marc Basnight Bridge that opened two years ago.

On April 15, Jose Armando Maqueda Mejia, 42, of Manns Harbor, was killed when the span collapsed while he was standing on top of the structure more than 90 feet above the water surface.

A petition has been launched calling for the 1,000 feet of the old bridge on the inlet’s southern shore, which is being converted into a fishing pier, be named for the man friends and family knew as “El Guero”.

Since the collapse happened over a navigable waterway, the U.S. Department of Labor’s Occupational Safety and Health Administration has taken charge of the probe which could take several months..

The debris from Thursday’s explosion, along with three vertical support towers, are all that’s left to remove of the bridge built in 1963 and replaced two years ago by the Marc Basnight Bridge.

Work taking place this week along the Basnight Bridge is unrelated to the Bonner demo, and is punch list items that remain from the construction of the new span.