Last June, I wrote a blog about the National Park Service?s decision to stop uncovering the circle of stones at the old Cape Hatteras Lighthouse site after storms.

The massive granite stones ? weighing at least 3,000 pounds ? were part of the Cape Hatteras Lighthouse foundation that were cut away during this historic move of the lighthouse in 1999 to save the iconic structure from the encroaching Atlantic Ocean.

After the lighthouse was moved to its new location, 2,900 feet to the southwest, the nonprofit Outer Banks Lighthouse Society paid almost $12,000 to have the stones engraved with the names of the 83 keepers of the light.

The stones were arranged in a circle that marked the original location of the 1870 lighthouse. The circle of stones was unveiled on May 1, 2001, during a reunion of the descendants of the lightkeepers, and the Park Service?s re-dedication of the Light Station.

Over the years, the circle has been a magnet for residents and visitors, and the site of many weddings, memorial services, and even some christenings. 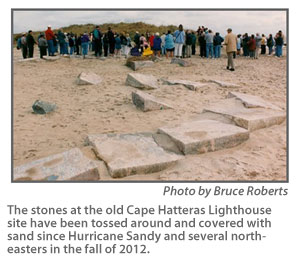 It?s a place of great historic and sentimental significance for both islanders and visitors.

However, the site has been periodically battered by hurricanes and northeasters over the years.  The stones have been tossed around and covered by sand.

The stones have been almost entirely covered by sand since Hurricane Sandy and several northeasters in the fall of 2012.  Occasionally a visitor brushes off some sand, so part of a stone is visible.

In a letter to the Outer Banks Lighthouse Society in June, seashore superintendent Barclay Trimble said, ?Because of coastal processes, namely shoreline erosion and dune migration, the stones have routinely become covered with sand requiring substantial effort to keep them uncovered.?

Trimble sought the Lighthouse Society?s blessing on one of its two alternatives. They were letting nature take its course at the site and the park would then use it to ?interpret coastal processes? or to move the stones down the road to the grounds of the Graveyard of the Atlantic Museum in Hatteras village.

Bett Padgett, president of the Outer Banks Lighthouse Society, told me last June that the society?s entire board of directors was unanimous in its view that neither alternative is acceptable.

?The Outer Banks Lighthouse Society is not going to stand by and let this happen,? Padgett said then and she told Trimble that in a June letter.

She said the society does want to work with the Park Service on a solution that will work for all.

Padgett and the lighthouse society board want to see the circle of stones kept together and in the vicinity of the Cape Hatteras Light Station, perhaps on the grounds between the current lighthouse location and the double-keepers? quarters.

Since last summer, the society and park officials have continued to talk, but they apparently are still not on the same page.

Siding with the society is the Hatteras Island Genealogical and Preservation Society, many of whose members are descendants of lightkeepers, including its president Dawn Taylor.

Taylor posted a change.org petition on her group?s site late last year, opposing the Park Service?s plan for the stones.

She also sent the petition to U.S. Rep. Walter Jones, R-N.C., in December.

On Dec. 20, Jones sent Trimble a letter asking for an update on the Park Service?s policy regarding maintenance of the stones.

?As I know you understand,? Jones wrote, ?Cape Hatteras Lighthouse is an enormously important piece of Eastern North Carolina?s heritage. Preserving the foundation stone, which bear the names of the lighthouse keepers, is essential.?

In his reply, he basically said the seashore does not have the funds to move the stones.

?At a time when the country, the NPS, and the seashore are experiencing significant budgetary constraints, the NPS must evaluate the best use of its limited funds,? Trimble wrote. Continuing to maintain the stones, as well as other facilities and providing necessary services have become problematic due to budgetary reductions.?

Trimble noted that the Outer Banks Group budget has been reduced by $2 million since 2010.

He goes on to say that the park has explored numerous alternatives for the circle of stones and has solicited input from the local communities and the public.

He concludes by saying the park will uncover the stones one last time this spring before the visitor season starts.

?In the event that a volunteer organization expresses an interest in assisting with the maintenance of the circle of stones, the NPS is willing and open to discussing what opportunities exist,? he said.

In an interview today and in other interviews last year, Padgett said the lighthouse society has floated the idea that islanders and other volunteers could get together periodically to clear sand off the stones.

However, after another major storm, shovels and brooms probably just won?t do the job.

Jones answered Trimble on Jan. 27.  He said he understood the financial constraints, but he ?respectfully? requested that the superintendent convene a meeting of the groups who oppose the park plan for the stones to discuss the matter.

Padgett said the lighthouse society welcomes a meeting, but that the Park Service is going to have to take the first step of uncovering the sanded-over site.

?We aren?t going to let this die,? she said.

So here?s hoping that the two groups along with islanders and park officials can come to a meeting of the minds or that Congressman Jones can help find the money needed ? and no one now knows how much that is ? to move the stones.

The Cape Hatteras National Seashore’s beach access webpage has received a makeover for 2023, with a new look that is designed to make it easier to scan and read on multiple devices. The beach access webpage provides information on seasonal closures and conditions throughout the National Seashore, with information on each ORV ramp from Bodie [...] Seashore News |  Full Article

More than 70 sea turtles that were being treated at the Sea Turtle Assistance and Rehabilitation (STAR) Center have been transported from the Manteo facility and released back into the ocean, per an update from the North Carolina Aquarium on Roanoke Island. “It’s been a minute since we updated everyone on the STAR Center patients,” [...] Island Features |  Full Article

2022 marked the Island Free Press’ 15-year anniversary, and it’s also our 15th year of analyzing the stories that grabbed our islands’ attention and left a permanent mark. Our Co-Founder and beloved Editor, Irene Nolan, would always do a wrap-up of the top stories of the year as her December “Editor’s Blog,” and since she [...] Editor's Blog |  Full Article

There’s an opportunity, right now, for the Outer Banks to secure the first new commercially-manufactured Futuro house in 50 years, and for that UFO to land directly in Frisco. Will the project garner community support? The loss of the Frisco Futuro House on October 19, (also known as the Frisco UFO), was a hard blow [...] Editor's Blog |  Full Article

Editor’s Blog: What will happen to the famous Mirlo Beach sign?

For many longtime visitors to Hatteras Island, the famed Mirlo Beach sign at the northern edge of Rodanthe was always a sign that a long car ride was almost over, and an Outer Banks vacation was about to begin. Well known as the unofficial welcome to the island’s seven villages, the large wooden sign has been [...] Editor's Blog |  Full Article