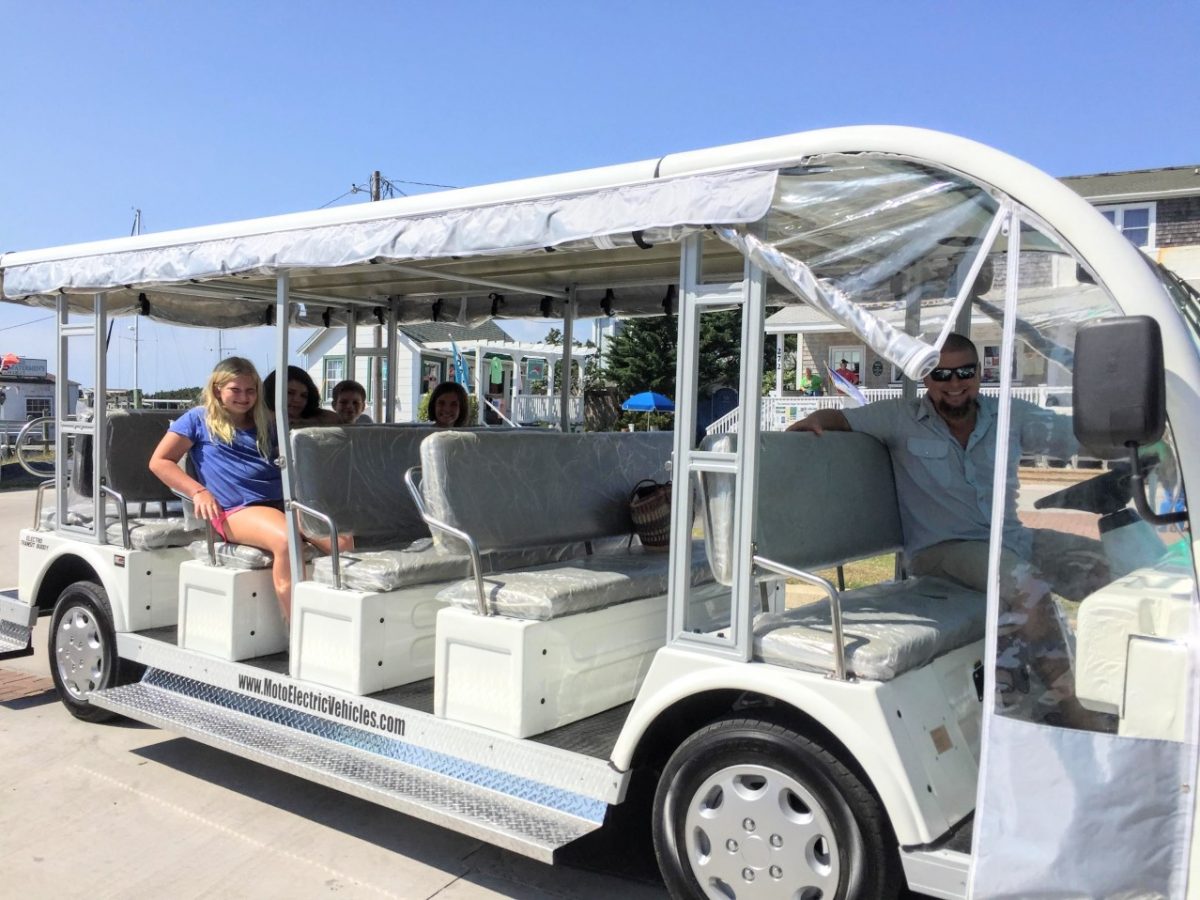 Back in May, Hatteras village residents overwhelmingly approved a special referendum on the primary elections ballot that allows its tax district revenue to be used to build a multi-use path.

But now there?s a decent chance that a federal BUILD grant award will be able to pick up that tab and provide a little extra to pay for trams like those Hyde County just acquired for Ocracoke.

Voila! Pathways + trams = activities on the Hatteras side for visitors using the new passenger ferry system.

But Ricki Shepherd, chair of the Hatteras Village Community Center Tax District, said it would be premature to count on the funds. The application for the $1.8 million grant was just submitted on July 17, and the award won?t be announced until December.

?At this point, we?re going to see if we get the grant,? she said in an interview. ?There?s no point in getting too carried away.?

In the meantime, the HVCCD has hired Albemarle and Associates – the same engineering firm that did the work on the Rodathe-Waves-Salvo and Avon multi-use paths – to do the preliminary plan for the village.

One way or another, Shepherd emphasized, Hatteras will be getting its bicycle/pedestrian path ? either with the tax district funds, or with the grant funds.

A walk-in session for the public to get information and provide input about the initial planning work will be held on Aug. 15 from 3 p.m. to 6:30 p.m. at the Community Building.

Maps will be posted to look at the proposed 3.5-mile pathway, which would start at the beginning of the village, go through the village to the ferry docks and then circle back around on Eagle Pass Drive.

It has long been a goal for the village to build pathways, but it could be fortuitous that the timing of the funding coincides with the launching in 2019 of the new passenger ferry route between Hatteras and Ocracoke. A critical part of that plan is the expanded parking on the Hatteras side for day trippers to Ocracoke.

In addition to the larger parking area, the state Ferry Division has paid for Ocracoke?s trams to transport visitors around the village, as well as passenger shelters and improvements at ferry terminals on both sides. But funds were not available to build trams for Hatteras.

But Shepherd said it just so happened that along with the Hatteras multi-use pathway, the trams qualified as a transportation infrastructure improvement under the federal BUILD grant. At the suggestion of Dare County Planning Director Donna Creef, she said, a request for $151,000 for the trams- based on the cost of the Ocracoke trams ? was added to the grant application. The total project would cost $2,299,500, with the $1.8 million grant and local non-federal funding of $500,000.

The Dare County Board of Commissioners had approved a resolution on July 16 in support of the BUILD grant for Hatteras.

The board promoted the path and the tram service as a ?unique multi-modal transportation project? that would be an important component of the success of the state?s first high-speed passenger ferry, which will cost $15 for a round-trip ticket.

In a July 13 letter to the U.S. Department of Transportation, NCDOT Secretary Jim Trogdon wrote in support of ?this very worthy and needed project,? saying it ?will create a more vibrant, walkable and livable community? and would ?significantly enhance mobility.?

The $9 million passenger ferry project is meant to supplement, not replace, the free vehicular ferry service between the islands. The state?s mission is not only to cut long summer wait times for ferries, but also to provide an exciting and rewarding visitor experience. When passengers disembark at Silver Lake, they can hop on the free tram that makes eight stops as it travels in a loop through Ocracoke village.

So far, Hatteras has not seriously addressed how to provide something similar on their side, said Dennis Robinson, a tax trustee for the HCCD.

?Ideally, the pathway is the No. 1 goal, but we would like to a mechanism to get them around after they?re dropped off on this side of the passenger ferry,? he said.

Robinson, who like Shepherd is a past president of the village?s Civic Association, said that he believes the community would get behind a village-wide effort to get on the passenger ferry bandwagon, and they would be backed by the Outer Banks Visitors Bureau.

?I think once we identify what we?re going for, they?ll absolutely support us,? he said of the bureau. ?Any way we can tap into the ferry system, I think everyone has an open mind.?

Shepherd agrees that a lot is possible, but until she sees what happens with the grant, she declined too much daydreaming. Right now, just knowing that a paved and safe pathway for bicyclists and pedestrians is in the village?s not-so-distant future is victory enough.

?It just makes a nice circle,? she said. ?We didn?t want to be just a parking lot for the passenger ferry.?

On Monday, January 27, several dozen representatives from the Outer Banks Anglers Club, as well regional media outlets, took a trip to a designated spot 7.5 miles offshore of Oregon Inlet to celebrate one of the first visible additions to a new artificial reef that has been years in the making. The new Artificial [...] Local News |  Full Article

So it is mid-January and you should be well into your New Year’s resolution to get in better shape – or at least have a clear path, right? If your answer is “No,” you are not alone. According to Psychology Today, only 8 percent of people keep their New Year’s resolutions and a whopping 80 [...] Island Features |  Full Article

We’re on the verge of a new decade, and as such, it’s time for our annual wrap-up of stories to keep an eye on in 2020, which will likely pop up in the headlines in the weeks and months to come. Most of these topics are leftovers from 2019 that are drifting into the New [...] Editor's Blog |  Full Article

2019 was a tough year for many islanders. Hurricane Dorian dominated the headlines in the fall, closing Ocracoke Island for nearly three months, and flooding and ocean overwash seemed to accompany every storm throughout the year, leading to multiple road closures and revived conversations about how to protect N.C. Highway 12. But it you look [...] Editor's Blog |  Full Article

EDITOR’S BLOG: Watch the Christmas Parade Live This Year, an ...

As the recent Christmas Tree Lighting in Hatteras village cemented, the holiday season has officially arrived on Hatteras and Ocracoke islands, and the Island Free Press is brewing up some cool new ways to share our local holiday spirit with our off-island readers. For the first time ever, the Island Free Press will be covering [...] Editor's Blog |  Full Article

Blue recycling roll carts still remain, untouched, at some Hatteras Island residences, but it’s been more than two months since Hatteras Recycle in Salvo closed its doors for good after Hurricane Dorian. “That was the last straw,” Todd Phillips, who had started the business in 2007, said of the September 6 storm. Phillips sold the [...] Editor's Blog |  Full Article

On Saturday, November 2, the first-ever Cape Hatteras Surf Fishing Heritage Celebration was launched at the Fessenden Center in Buxton, and an estimated 200 attendees drifted in and out of the transformed gym to attend a dozen presentations that focused on varying aspects of fishing, and its Outer Banks roots. Hosted by the Cape Hatteras [...] Editor's Blog |  Full Article

Editor’s Blog: When it comes to storm recovery on Hatteras Islan ...

This will be a brief blog, because at the Island Free Press, our work is currently better spent providing as much updated info as possible on the status of services, reentry to Hatteras Island, and where to go to get help. In that vein, if you know of any resources available to residents of Hatteras [...] Editor's Blog |  Full Article

On Friday, August 23, the North Carolina Marine Fisheries Commission (MFC) voted for the adoption of the Southern Flounder Fishery Management Plan Draft Amendment 2 by a 6-3 vote at their quarterly meeting in Raleigh. These management measures resulted in a proclamation this week by the Division of Marine Fisheries that closes the commercial and [...] Editor's Blog |  Full Article

This summer, coastal newspapers all around the country boasted headlines of record-breaking sea turtle nests along their local beaches. These headlines were especially prevalent in communities along the shorelines of North Carolina, South Carolina, Georgia, and Florida, which includes are our own home turf of the Outer Banks. As of the first week of August, [...] Editor's Blog |  Full Article

EDITOR’S BLOG: Online Tools That Will Make Your Hurricane P ...

Earlier in July, representatives from the National Weather Service (NWS) and Dare County came together to host a Hurricane Community Forum in Buxton. The goal of the event was to share essential information with island residents who are regularly impacted by coastal storms, and while the presenters were preaching to the choir when it came [...] Editor's Blog |  Full Article

EDITOR’S BLOG: Is Our National Seashore Getting Closer to Becoming an International Dark Sky Park?

EDITOR’S BLOG: Bikes and Turtles – Two New Bills to Keep an Eye on in 2019

EDITOR’S BLOG: History of the Bonner Bridge, and a Look Back at Decades of Controversy

What’s in a Name? A Closer Look at the Bonner Bridge Naming Debate

A New Look for the New Year

Year In Review – the Stories that Grabbed Our Attention in 2018