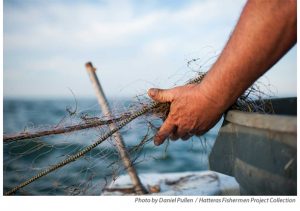 The revitalized Dare County Commission for Working Watermen held their inaugural meeting on Wednesday, March 21, and tackled several pressing issues that are connected to the local fishing industry.

The commission originally formed in 2008, but quietly ceased meeting in December of 2012 without formally disbanding. After public comments made by journalist and researcher Susan West at the BOC’s August 20, 2018 Dare County Board of Commissioners meeting, interest in reviving the commission was renewed, with County Commissioner Steve House signing on to be the Chairman and county commissioner representative for the endeavor.

The role of the Commission for Working Watermen is to serve as an advisory council for the Dare County Board of Commissioners (BOC), and to voice the concerns of working watermen to the BOC, North Carolina Marine Fisheries, state legislators in Raleigh, and other decision or policy makers, as needed.

The seven-person commission currently has five members in place, which includes Chairman Steve House, Jamie Reibel of North Carolina Watermen United, Alana Harrison of Harbor House Seafood Market, fishermen Joe Wilson and Dewey Hemilright, as well as Sara Mirabilio of North Carolina Sea Grant, who holds the non-voting science seat. The commission’s first action early on in the meeting was to nominate and unanimously appoint Reibel as Vice Chairman, and Harrison as Secretary of the commission.

Chairman House noted at the meeting that two seats were still at-large for the Commission for Working Watermen, and he hoped to enlist more representatives from Hatteras Island.

“I definitely want to get more people from Hatteras involved, because this affects them more than anyone else,” said House. “I would love to have some more Hatteras input on the commission, and I need boots on a boat.”

In other business, the commission discussed the following topics:

The commission discussed the recent emergency meeting that was called by the North Carolina Marine Fisheries Commission (MFC) to direct the Division of Marine Fisheries Director, Steve Murphey, to issue a proclamation restricting the use of gill nets in the Neuse and Pamlico Rivers.

The gill net restriction was initially proposed at the MFC’s February meeting, but the Director declined the request based on scientific data that did not support a ban. However, a statute is in place that allows the MFC to force the Director’s hand on issuing a proclamation, and this was approved at the emergency meeting in a 5 to 4 vote. (More information on that meeting can be found here.)

The Commission for Working Watermen had a number of issues with how the emergency meeting was conducted. For one thing, the MFC just barely granted the required 48 hours’ notice for the meeting, and the “emergency” designation was inaccurate as the proposal of the ban was not an emergency situation.

But the main issue for the commission was that the MFC forced the Director’s hand while ignoring the scientific data that was responsible for the Director’s declining of the request. The commissioners noted what while this particular gill net ban did not affect Dare County directly, the actions of the MFC at the meeting could set a dangerous precedent going forward.

“The shenanigans of how this went down are unacceptable,” said Wilson. “This issuance of a non-science based proclamation… it’s frustrating to say the least”

“It sparked a lot of angst in myself, because if they can do that there, then they can do that anywhere in North Carolina,” said House. “…The [statute] was supposed to be there as a checks and balances of authority, and this is an abuse of that.”

The commission discussed potential remedies, which are limited, as the only way to overrule the proclamation is through the court system. House hinted that this was an option in motion, and the commission also discussed the potential replacement of current MFC members.

“The make-up definitely has to be questioned,” said Mirabilio. “They’re stacking the deck, so this is not a balanced decision.”

After discussion, the Commission for Working Watermen decided to recommend to the Dare County BOC to send a letter to the governor stating that the emergency meeting and results were not acceptable. House noted that the BOC drafted and sent a similar letter when the issue of redefining a commercial fishermen arose, and the input was effective.

“I know for a fact that the letter we went last time did reach the governor’s office, and it did reach his desk,” said House. “…It had an impact.”

The commission also voted to draft a letter regarding the disparity for southern states, and specifically North Carolina, in bluefin tuna quotas. Reibel noted that the geographic representation in the quota strongly favored the New England states, and that the general category quota could and should be increased for North Carolina.

The Commission for Working Watermen agreed to chime in on the issue, and a letter will be written by Reibel, reviewed by the commission, and then sent to the BOC and, prospectively, the state legislators. “I plan on talking to our representatives about it,” said House. “They were interested in how they could help with this issue.”

The commission also reviewed the implementation of the new North Carolina Oyster Trail, which mimics the Virginia Oyster Trail in that it will highlight destinations and businesses along the N.C. coastline that are tied to the production, harvest, and / or consumption of oysters. A multi-stakeholder group that was bolstered with recommendations from the UNC Kenan-Flagler Business School came up with the idea for the trail, following a Napa Valley and Virginia Oyster Trail model.

“The North Carolina Oyster Trail is moving forward, so we need to be aware of it in case we are asked questions,” said House. “It’s an interesting idea that could promote the Dare County commercial fishing industry as well.”

“There’s definitely a lot of [visitor] interest in what we take for granted,” said Wilson.

One thing the commission and public attendees agreed on, however, was the need for the oyster trail to be more focused on education, and not necessarily restaurants, wineries, and other businesses with fringe ties to the oyster and seafood industries.

“In essence, I think this will be a good thing, but it will be a [tourism-oriented] thing,” said House.

At the conclusion of the meeting, the Commission for Working Watermen agreed to meet quarterly, and roughly one to two weeks after the MFC meets in order to address any subsequent issues.

With this in mind, the commission set their next meeting for Tuesday, May 21 at 6:30 p.m. at the Rodanthe-Waves-Salvo Community Center. The next meeting of the NC MFC is slated for May 15-17.