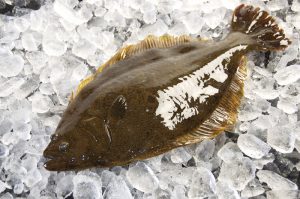 On Friday, August 23, the North Carolina Marine Fisheries Commission (MFC) voted for the adoption of the Southern Flounder Fishery Management Plan Draft Amendment 2 by a 6-3 vote at their quarterly meeting in Raleigh.

These management measures resulted in a proclamation this week by the Division of Marine Fisheries that closes the commercial and recreational season for southern flounder on September 4.

The plan stems from State law which mandates a minimum 52% reduction in flounder catches this year, compared to 2017 numbers.

The Draft Amendment 2 that was passed on Friday calls for a 62% reduction in southern flounder harvest (compared to 2017) in North Carolina in 2019, and a 72% reduction in harvest beginning in 2020, to be achieved through commercial and recreational season closures. The division also proposes yardage and time restrictions for gill nets, and prohibiting the use of puncturing devices, such as gaffs, in the pound net fishery.

The measure has been weighted down with controversy since it was first introduced in late 2018 and early 2019. From potential issues with the accuracy of the data, to the hastily orchestrated nature of the amendment, the public and even Marine Fisheries Commission members have cited ample issues with the plan over the past few months.

Dare County Commission for Working Watermen Chairman and County Commissioner Steve House attended the public comments portion of the MFC quarterly meeting last Wednesday night, and has been actively following the progression of the Southern Flounder Fishery Management Plan since it first came on the radar. House has spoken with both MFC members and state legislatures, as well as representatives from the local fishing industry, to determine the effects of the newly implemented plan, and what comes next.

Due to this expertise, we talked with House to get his insight on what the passage of this controversial measure means for local fishermen on the Outer Banks.

Here are our questions and answers with Commissioner House on what’s happening now, and what could happen down the road when it comes to flounder fishing.

How does the passage of Amendment 2 affect the Outer Banks, and how soon will potential impacts occur?

“The economic impacts on the Outer Banks are going to be hard felt. That’s a given, because a lot of our commercial fishermen won’t be able to make the landings they have in the past.

“But it doesn’t just affect them, it affects the whole community, and it will be felt throughout Dare County. It will trickle down from the commercial fishermen, to the fish houses, to the servers and restaurants, and even to the consumers. Plus, there are added repercussions that will be felt throughout the community. After all, fishermen go to grocery stores, buy clothes, [etc.,] so impacts will be felt everywhere, and pretty rapidly too. We should actually start seeing some impacts within the next couple of months.”

Were economic impacts taken into account in Draft Amendment 2?

“In the 68-page document, there was only a page or two that dealt with economic impacts. It basically said that if fishermen catch less fish, they will make less money – there were no additional facts and figures, and it did not take into account [the nature] of a small fishing community, and how it ripples through the community.”

Some local fishermen had trouble with the data, stating that the flounder catches in recent years could be low simply because there are less fishermen. What do you think about this argument?

“I totally support that concept – if there are less fishermen, there are less catches. We had 30,000 commercial fishing licenses [issued] 30 years ago, and as of last year, there’s only about 3,000, so there are definitely less fishermen out there. And flounder numbers this year are through the roof –they are catching record numbers.”

You have talked with MFC members. How do you think they feel about fishermen’s concerns?

“They really did seem to be receptive, especially on the main topic, which is the economic impact. Several commissioners made the comments that they would like to see more economic impact studies done on these recommendations going forward. That’s something we have been pushing for the last two or three years, and that’s one thing that was added to the Magnuson-Stevens Fishery Conservation and Management Act when it went through congress last year…

“A lot of the commissioners did speak up and say they thought this was put together hastily, and they want to try to avoid that in the future.

“From what I gathered, they are very much into hearing what the public has to say. Going forward, they would like to have more public input on the study part.”

The MFC made several changes to Amendment 2 after it was passed, and also had lengthy discussions on how it could be altered. What do you think about these discussions and changes at Friday’s meeting?

“I was kind of puzzled that they let guide fishermen have a stake in it, where they could have four flounders per day, which are not part of the restrictions. Another point brought up was the possibility of doing trip tickets for guide services, which was heavily defeated in the past…

Draft Amendment 2 will be in place for two years. What comes next?

“Now, [the MFC] is working on Amendment 3, which will go into effect in 2021. They are currently doing the research [for Amendment 3], and one of the things we can do to be proactive is to get more involved during the study process, instead of waiting for them to come out with something. It comes down to being more proactive instead of reactive.

“Also, the next study they are doing is blue crabs, and the initial assessment of blue crabs that they introduced in the meeting was that blue crabs are being overfished. So we’ll want to keep an eye on that as well.”

What can the public do going forward?

“The community can already start getting involved by contacting the Division of Marine Fisheries and voicing their concerns, and contacting each of the commissioners on the marine fisheries commission.

“We need to be proactive, and we need to start now.”

The National Weather Service in Newport/Morehead City, NC will be conducting two Basic SKYWARN (weather spotters) training classes on April 22nd and April 27th from 6:30 to 8:00 PM. Both classes will be virtual. These classes train volunteers to report severe weather to the National Weather Service. Both classes are free and open to everyone; [...] Local News |  Full Article

About a dozen local residents made impassioned pleas to the Dare County Board of Commissioners during an April 19 public hearing, asking it to reconsider its plan to sell Dare Home Health & Hospice (HH&H). The speakers contended that the county should invest and make changes within the agency that provides in-home care to Dare [...] Local News |  Full Article

Dare County announced 6 new positive COVID-19 test results on Tuesday, April 20, bringing the total number of cases in the county since the pandemic began to 3,081. With Tuesday’s new cases, the current number of active cases in the county is now 27. The 6 additional cases consist of 3 residents and 3 non-residents [...] Local News |  Full Article

The N.C. Department of Transportation’s Ferry Division will be returning to its full schedule on Pamlico Sound routes between Cedar Island, Swan Quarter, and Ocracoke on April 21. A test run with the M/V Swan Quarter today revealed that the U.S. Army Corps of Engineers’ dredging efforts made vast improvements to ferry channel depths and [...] Local News |  Full Article

The N.C. Department of Transportation (NCDOT) and the National Park Service (NPS) today announced the launch of the first self-driving vehicle to be tested at a recreational public lands site in the nation. Fittingly, the Connected Autonomous Shuttle Supporting Innovation, or CASSI, was launched at the Wright Brothers National Memorial in Kill Devil Hills – [...] Seashore News |  Full Article