The Academy of Country Music this week announced that its Video of the Year award has gone to country music superstar Brad Paisley for “Waitin’ on a Woman,” featuring the iconic actor Andy Griffith, 82, who is a superstar on the Outer Banks.

That news came just before the 44th annual Academy of Country Music awards, which will be broadcast on Sunday, April 5, at 8 p.m. on CBS.

The music video not only features Griffith, who lives on Roanoke Island, but was filmed on the Outer Banks – at the Tanger Outlet Center in Nags Head and on Pea Island National Wildlife Refuge. In the video, Paisley is at “West Town Mall,” which all of us will recognize at the Tanger Center, waiting on his woman. He makes several cell phone calls to his woman, and then along comes Andy Griffith in overalls and a flannel shirt. He sits down on the bench with Paisley and asks in his southern drawl, “You waitin’ on a woman?”

The video switches back and forth from Paisley’s singing to Griffith’s folksy spoken lines. Griffith tells the singer about how he has waited on his woman since 1952.

When he finishes telling his story, Griffith’s ethereal character disappears from the bench and reappears sitting on a bench on the beach at Pea Island

I’ve read somewhere statistics show
The man’s always the first to go
And that makes sense ’cause I know she won’t be ready
So when it finally comes my time
And I get to the other side
I’ll find myself a bench, if they’ve got any
I hope she takes her time, ’cause I don’t mind
Waitin’ on a woman

So Andy’s sitting there on the bench, all by himself on a windswept beach, dressed in white, and presumably waiting on his woman to join him on “the other side.”

The video is quite endearing, and the tune is nice to listen to. You will find yourself looking and listening more than once.

Griffith looks terrific at 82, and Brad Paisley doesn’t look too bad either. They both have really nice eyes and the camera plays to that. 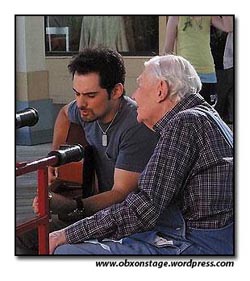 “There’s a certain irony to ‘Waitin’ winning. The lyrical theme of the song is patience, and the song itself waited three years after its original release on the ‘Time Well Wasted’ album to become a single. So now the video….gets honored by an Academy that seems unable to wait until the actual ceremony to start busting out honors,” according to the Great American Country Web site.

Also from the GAC Web site:

“I am glad it came out when it did,” Brad says of “Waitin’.” “I could have never done the video at the time when it would’ve been a single in the first place. I didn’t know any way of getting a hold of Andy Griffith at the time. So getting to do this really did complete the whole circle for me, being able to have this song that has this sentiment, and also having my dream video. He’s my favorite TV character of all-time, and to be able to take that guy and honor the song with his presence, but in some ways, honor him … it’s a great thrill for me.”

Although the Video of the Year has already been announced, you can catch it on the awards show Sunday night. Paisley has been nominated for six awards, including Entertainer of the Year.

You can watch the video by clicking on this link: